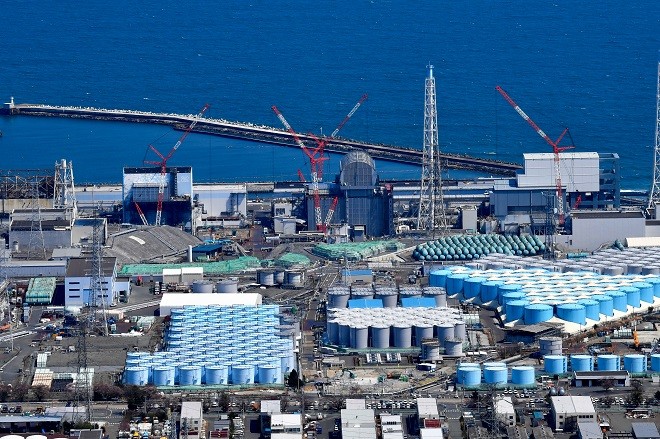 More than four months have passed since the government gave the green light to plans for Tokyo Electric Power Co. to release treated radioactive water from the crippled Fukushima No. 1 nuclear plant into the Pacific Ocean.

TEPCO, the plant’s operator, recently announced it would construct a tunnel to discharge the water about 1 kilometer offshore. At the same time, the government unveiled its strategy for responding to concerns the discharge could cause irreparable reputational damage to local businesses, the fishing industry, in particular.

Ever since the nuclear crisis triggered by the March 2011 earthquake and tsunami disaster, the utility has been pumping tons of water to cool melted nuclear fuel at the wrecked facility. Rain and ground water have added to the deluge with the result that the volume of radiation-contaminated water has continued to grow rapidly.

The water is stored in more than 1,000 tanks installed within the compound after being treated with special equipment to eliminate most of the highly radioactive materials. TEPCO said the tanks will reach capacity around spring 2023. The plant operator then intends to start releasing the treated water after first diluting it with seawater.

This will be a gigantic construction project that will start with a geological survey of the seabed, something that must be approved by the Nuclear Regulation Authority.

TEPCO pledged to measure the concentration of tritium, a radioactive isotope of hydrogen produced as a byproduct in nuclear reactors which cannot be removed with filtering equipment, before the water is released into the ocean. This is a welcome effort to allay concerns among local businesses and communities, especially the fisheries industry.

The company, whose reputation has further been tarnished by a series of embarrassing revelations about security lapses, including those at the Kashiwazaki-Kariwa nuclear plant in Niigata Prefecture, needs to realize it has an obligation to take all possible steps to ensure the operation is conducted safely and be willing to disclose all related information and options.

No matter how cautiously the problem of tritium-tainted water is handled, the plan to release treated contaminated water into the sea is bound to trigger negative publicity and deter people from eating fish caught in local waters.

To deal with this challenge, the government decided to establish a fund to buy catches that can be put in frozen storage. The fund is framed as an emergency relief measure to assist fishermen and fisheries businesses expecting to face sharp drops in sales. It is a well-conceived proposal to help those affected by the nuclear disaster regain their livelihoods, in addition to providing cash to compensate for their economic losses.

But not all marine products are fit for freezing. Frozen fish tend to fetch lower prices compared with when they are sold fresh. How to secure viable operations of the proposed fund remains a key question, but the government has only said that details will be worked out by the end of the year.

Fisheries businesses may not be only targets of rumors that require compensation payouts. To ease anxiety among local businesses, TEPCO said victims alone will not be forced to bear the burden of proof. The company says it will assess economic losses by comparing prices and sales after it starts releasing the contaminated water into the sea with corresponding estimates for before the operation gets under way.

Still, local businesses remain concerned about whether they will receive appropriate compensation from the utility, which rejected out-of-court settlements with a number of plaintiffs in damages lawsuits proposed by the government’s Nuclear Damage Compensation Dispute Resolution Center. The government, which is effectively the utility's largest shareholder, has a duty to supervise the company to ensure it offers compensation swiftly and appropriately to any new parties that suffer losses as a result of the water discharge operation.

TEPCO hopes to begin discharging the treated water in spring 2023. It has pledged not to “undertake any disposal measure without gaining the understanding of stakeholders.”

The company will not be able to move forward with the plan unless it first wins the trust of the local communities through sincere and honest talks.