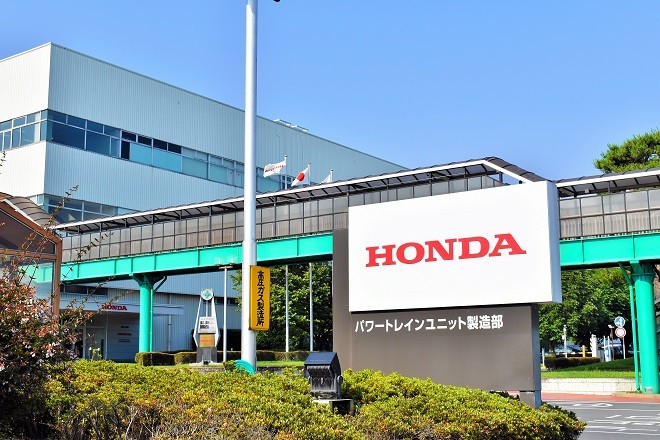 From spring through summer on the Formula One racing circuit, drivers running on Honda Motor Co. engines took a remarkable five consecutive checkered flags for the first time in 33 years.

But that success may have fueled discontent at the Honda shareholders meeting in late June, as one stockholder criticized the automaker's decision to pull out of F1 racing at the end of this season.

Another said, "The founder would be saddened to see (the automaker) stop engine production."

But Honda President Toshiro Mibe defended his company's decision. He said Honda's new driving force is his decision to no longer sell vehicles that emit carbon dioxide by 2040, replacing them with electric or fuel cell vehicles.

"We'll compete in a decarbonization race from now on," Mibe said.

Honda will also hit the brakes on producing hybrid vehicles that run on a combination of gasoline and electricity.

The decision has stirred a backlash and uncomfortable feelings even among its employees, who say it is an "easier-said-than-done target."

The automaker decided to shut down an engine parts plant in Mooka, Tochigi Prefecture, in 2025. When it offered an early retirement program to all Honda employees aged 55 and older, more than 2,000 employees, or 5 percent of its full-time workforce in Japan, signed up.

"I have nostalgic feelings for engines. But I already had a hunch when I was working as an engineer that cars would be increasingly electrified to make (engines) a thing of the past before too long," said Mibe, a former engine engineer. "That trend is approaching with the flow of decarbonization."

While the European Union intends to effectively ban the sales of new gasoline-powered vehicles in 2035, U.S. President Joe Biden has signed an executive order that will require half of all new cars sold in 2030 to achieve zero emissions.

Honda's move seems to have been influenced by the shift to electric vehicles in overseas countries. However, some view it as so "Honda-esque."

A former employee described it as a "strategy of ushering someone to the second floor and removing the ladder," which has been passed down through successive generations of Honda engineers. It means setting a high goal and driving employees to achieve it.

One successful example was the development of the CVCC engine in the 1970s.

When the Clean Air Act was enacted to severely regulate exhaust gases in the United States, the largest auto market in the world, Honda was the first automaker to meet the stringent standards. It led to the huge success of its Civic model.

And when it met California's low emission vehicle standards in the 1990s, Mibe was involved as an engineer.

Honda's exit from combustion engines appears not completely unrelated to a sense of stagnation that has lingered at the company in recent years.

Although Honda has always been a top-tier company in terms of engine technologies, it lagged behind Toyota Motor Corp. in developing hybrid vehicles in the 1990s. It also fell behind its rival by a large margin in terms of the number of units sold and profits.

"I think it wants to be a game-changer by concentrating on next-generation technologies while Toyota keeps hybrid vehicles as an option," said a senior member of a parts manufacturer.

When Mibe hosted a teleconference in early summer, he faced a barrage of questions from presidents of about 30 affiliated auto parts makers who said they were baffled by Honda's sudden decision and that they were worried about their future work volume.

"We wanted them to be prepared for electrification by showing them our future goal in a clear-cut manner," a Honda executive said.

As for the prospects for parts makers, the executive added: "It's only natural that they won't survive unless they do something different."

Electric and fuel cell vehicles account for less than 1 percent of all cars currently sold by Honda, with the remaining 99 percent powered by combustion engines.

"We are tied up with work at the moment," said the president of an engine parts manufacturer in Saitama Prefecture. "Even though we are told to think about the future because there will be no more work, it's not easy."

But the crisis is not a thing of the distant future.

This past spring, the credit research company Teikoku Databank Ltd. announced the first bankruptcy case in Japan apparently caused by the shift to electric vehicles.

It was Osaka Giken Co., which had provided planning and designing services for machines and metal molds used to make engine parts.

Founded in Osaka Prefecture in 1964, the company was named in tribute to Honda Giken Kogyo, Honda's original Japanese name. Having provided support to an overseas automaker to develop an engine, its sales reached 1.3 billion yen ($11.8 million) in or around 2000.

But with its clients shifting to electric vehicles, the company's sales plummeted in or around 2015, decreasing to 130 million yen in 2020.

Its third-generation proprietor, Ryuzo Ode, 69, decided to close the company after he failed to win an order to make a machine used to manufacture parts for Honda's next model engine.

Ode gave an apologetic speech in front of 10 employees, explaining that the company's workload had decreased rapidly due to the novel coronavirus pandemic and the shift to electric vehicles.

The president said he had made every effort to shift to electric vehicles. Ode showed employees reports from a securities firm that urged the company to find new contracts, while he ventured into producing brake parts also essential to electric cars.

Still, it wasn't enough to cover lost profits from engine-related parts, which accounted for 80 percent of the company's sales.

"We needed to make efforts to change our business model. I want other companies in the same business to learn that lesson," Ode said.

Japan's automotive industry has a pyramid structure, with Honda and other leading automakers at the top. That pyramid includes subcontractors, maintenance shops, taxi operators, gas stations and other related businesses on lower rungs. The industry employs about 5.5 million workers in Japan.

Toyota President Akio Toyoda, who also serves as head of the Japan Automotive Manufacturers Association, has estimated that the employment of 700,000 to 1 million people will be affected if combustion engine cars are replaced by electric and other zero-emission vehicles while remaining dependent on thermal power generation to provide power to factories.