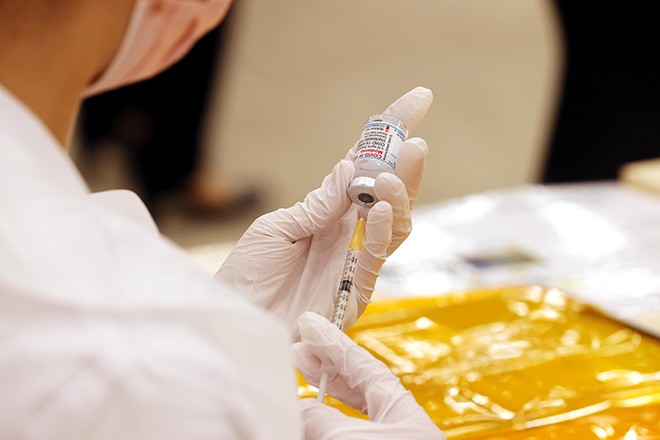 The highly contagious Delta variant of the novel coronavirus now sweeping Japan and elsewhere is making it almost impossible to achieve herd immunity despite huge advances in the vaccine rollout, health officials warn.

Statistics from Japan and overseas show that even if a vaccination rate as high as 60 percent is achieved--the benchmark normally used for reaching herd immunity--it may not be enough.

The government's panel of experts dealing with the COVID-19 crisis issued recommendations Sept. 3 that for the first time raised the prospect of difficulties in reaching herd immunity to protect the public at large, even if everyone who wanted a full vaccine dose got it.

Israel, which moved faster than most on its vaccination rollout, found that new cases of COVID-19 are rising again even though more than 60 percent of the population has received the required two doses.

The Israeli health ministry also announced that the vaccines now being used are less effective against the Delta variant.

Another concern is so-called breakthrough infections among individuals who have already been vaccinated against COVID-19.

In Japan, at least 2,000 people who had been jabbed twice were found to be infected in July.

This led health experts to warn that even those who have been fully inoculated need to continue being vigilant against becoming infected.

That is especially true in Japan where not even half of the population has yet received two doses of one of the three vaccines available.

In light of this, the number of new cases nationwide continues to hover around the 10,000 mark while COVID-19 patients who develop serious symptoms continues to rise.

At a Sept. 3 experts’ panel meeting, Yuki Furuse, a program-specific associate professor of systems virology at the Institute for Frontier Life and Medical Sciences at Kyoto University, released the results of a computer calculation of the number of fatalities from COVID-19.

Using different vaccination rates for different age groups and acting on the assumption that the vaccine had a 70-percent effectiveness rate in preventing infections via the Delta variant, Furuse came to an alarming conclusion.

He said contact with other individuals would have to be reduced by 50 to 60 percent in comparison with before the spread of COVID-19 to bring the number of fatalities over the course of a year to around 10,000, which would be a similar level to seasonal flu.

Reducing human contact by 50 percent would require people not only to continue wearing face masks and limit numbers who wine and dine at the same time, but also stronger measures, such as states of emergency when necessary, according to experts.

They are also well aware that months-long restrictions on everyday life have left the public weary, which will make it more difficult to gain their cooperation in cutting down on outdoor activities.

Business leaders are also clamoring for a relaxation of steps to allow the economy to recharge.

At his Sept. 3 news conference, Shigeru Omi, the chairman of the experts’ panel, recommended that people continue wearing face masks for the foreseeable future, adding that some aspects of everyday life could return to some sort of normalcy if individuals have been vaccinated and the medical care structure comes under less strain.

He called on the government to decide on the extent of relaxing such restrictions only after setting up a forum to discuss options from among a wide segment of the population.

(This article was written by Kenta Noguchi and Kai Ichino.)