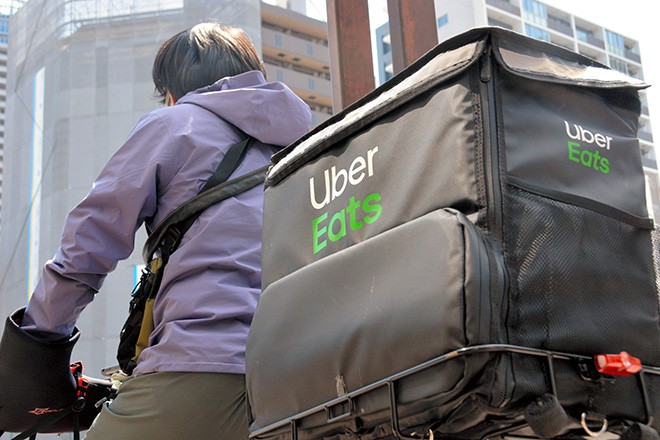 Uber Eats Japan Inc. has suspended the hiring of foreign students and other individuals from overseas as food delivery staff to prevent people who overstay their visas from abusing its platform to work illegally.

The freeze follows a case in June in which police sent papers to prosecutors on Uber Japan Co., which operated Uber Eats Japan until late last year, and two people linked to the company on suspicion of hiring two Vietnamese as delivery staff who overstayed their visas in violation of the immigration control law.

Prior to that, there were several cases in which foreign delivery staff were caught overstaying their visas in Tokyo.

With the hiring freeze, foreigners staying in Japan on a student visa, cultural activity visa and specified activity visa, which restrict which types of work the visa holder can perform, will no longer be eligible to register as new delivery staff for Uber Eats.

The policy went into effect on Aug. 25. But those who have registered by Aug. 24 and prior can continue to work as delivery staff.

Uber Eats Japan said that when it hires foreign individuals, the company interviews them in person to confirm if they are legally staying in Japan by asking them to show their passports and residence cards at its compliance centers in Tokyo and three other cities.

The company said it also checks attendance at schools of foreign students whom it employs.

“We decided on the freeze on new hires as the vetting process requires considerable resources of the company,” said an Uber Eats Japan public relations official.

About 100,000 people are registered as delivery staff across Japan.

The company said none of its foreign staff are overstaying their visas as the company has confirmed the visa status of all of them.