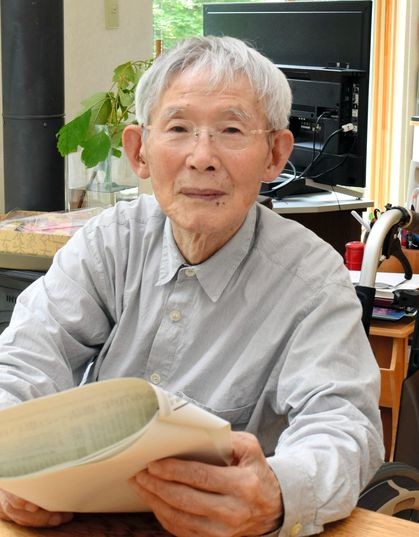 Historian Daikichi Irokawa, who died on Sept. 7 at age 96, broke free of the restraints of academia to blaze a trail in modern and contemporary history.

He retraced the history of the "Jiyu Minken Undo" (Freedom and people's rights movement) of the 19th century. He frequently visited the Kumamoto Prefecture city of Minamata to listen to the accounts of victims of Minamata disease. And he practiced what he preached as a civil rights activist.

Born in Chiba Prefecture in 1925, he was called up for military service while studying at Tokyo Imperial University (present-day University of Tokyo), and joined the navy air corps.

As an officer, he was tasked with selecting members of the kamikaze suicide squad for deployment the following morning and personally notifying them of the mission.

Irokawa was consumed with guilt for sending more than 20 young men to certain death.

After Japan's defeat in World War II, he kept trying to understand why innumerable Japanese citizens, including himself, had supported that reckless war.

It was not just a handful of leaders who dragged the nation into war. On the contrary, the people themselves willingly contributed to the war effort and doomed their own nation to ruin.

How did each person consider each situation for themselves, and what did they do?

Realizing the need for an academic discipline that meticulously examines the mindset of ordinary people, Irokawa argued that the common folks themselves must become the narrators of their own history.

In 1968, he and his students visited the home of an old, established family in Tokyo's Tama district and discovered in the storehouse a cloth-wrapped bundle of documents made of Japanese "washi" paper.

It was a draft of a Japanese Constitution compiled during the Meiji Era (1868-1912). Noted for its distinctively progressive content that emphasized human rights, it came to be known as the "Itsukaichi Constitution."

Later in his life, Irokawa relocated to the southern foothills of Mount Yatsugatake in Yamanashi Prefecture. He blended into the community, forming a neighborhood mutual-aid group called "Neko no Te (Cat's paw) Club," named after the old humorous Japanese saying that when one is extremely busy, one could even use a helping hand from a cat.

Reportedly, he spent idyllic days there, enjoying skiing when not writing.

The idea of compiling "Jibunshi" (literally, "one's own history") became explosively popular at one time, but Irokawa cautioned, "The purpose must not be to brag about yourself, nor should its perspective be egocentric."

"Rather," he requested, "please write about your regrets and mistakes and put them in historical context."

That was his last will as an academic who perpetually sought the essence of history.