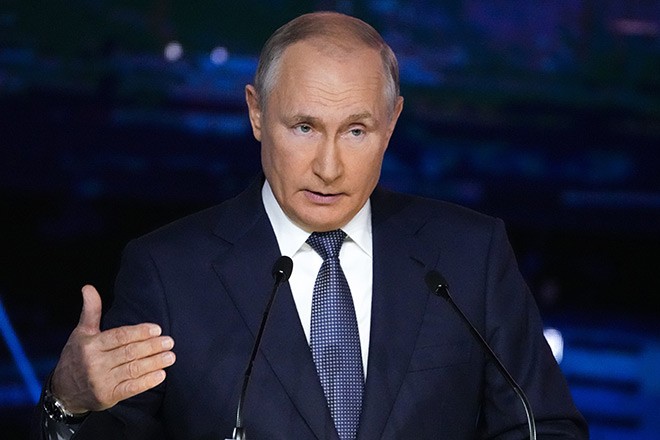 Russian President Vladimir Putin gestures as he delivers his speech during a plenary session at the Eastern Economic Forum in Vladivostok, Russia, on Sept. 3. (AP Photo)

Japan is dismayed at a proposal by Russian President Vladimir Putin to establish a special economic zone in the disputed Northern Territories that would enforce Russian law and has formally expressed its displeasure to Moscow.

Foreign Minister Toshimitsu Motegi expressed regret Sept. 7 over the plan that would allow companies from nations other than Japan to operate in the zone and receive tax benefits.

The four islands off Japan's main northern island of Hokkaido were seized by the Soviet Union in the waning days of World War II.

As far as Japan is concerned, Putin’s proposal goes against the spirit of bilateral economic cooperation on the Northern Territories to resolve the decades-old thorny issue of sovereignty that had been agreed to by Putin and the previous government headed by Prime Minister Shinzo Abe.

Abe’s successor, Yoshihide Suga, who is bowing out shortly after only a year in office, has shown little enthusiasm for pushing ahead with such economic cooperation. This, analysts suggested, may have led Putin to come up with an entirely new proposal to keep Tokyo off-balance as Japan considers how to resume diplomatic talks with Moscow.

Putin unveiled his proposal Sept. 3 during a session of the annual Eastern Economic Forum held in Vladivostok.

Companies operating in the special economic zone would be exempt for 10 years from paying income and property taxes.

There has been little progress in talks on economic cooperation due to sharp differences on which legal framework to use.

Japan has called for a special structure that would place Japanese companies and individuals outside of the jurisdiction of Russian law on grounds the Northern Territories lawfully belong to Japan.

But Russia has refused to back down from its plan to enforce Russian law when it comes to economic cooperation in the Northern Territories.

Suga has adopted a far more cautious approach to the issue than the one pushed by the economy ministry due to concerns Japan would only be contributing heaps of money without getting anything in return.

A sharp divide in approach to the issue has also created a huge hurdle between the two nations. While Japan considers economic cooperation inseparable from resolution of the territorial dispute and the signing of a peace treaty with Russia to formally end hostilities stemming from World War II, Moscow is seemingly content to deal with each of the three issues separately. That has led to pushing ahead with economic development in the Northern Territories.

Putin is clearly miffed at Japan’s failure to put more on the table.

Addressing the Eastern Economic Forum, he said it was “nonsense” that no negotiations were being held between the two nations on seeking a peace treaty.

He also criticized Japan for constantly changing its stance with regard to the 1956 Joint Declaration that would oblige Russia to first return the Habomai islets and Shikotan island to Japan once a peace treaty is signed. Abe signaled a major policy shift in November 2018 when he agreed with Putin to accelerate peace treaty negotiations based on the 1956 Joint Declaration. Until then, Japan had insisted that a peace treaty could only be signed once sovereignty over all four islands had been resolved.

Putin may have also come up with his proposal to help the United Russia ruling party in the Russian Far East in parliamentary elections to be held later this month.

(This article was written by Tatsuya Sato and Ryo Aibara in Tokyo and Takashi Kida in Moscow.)