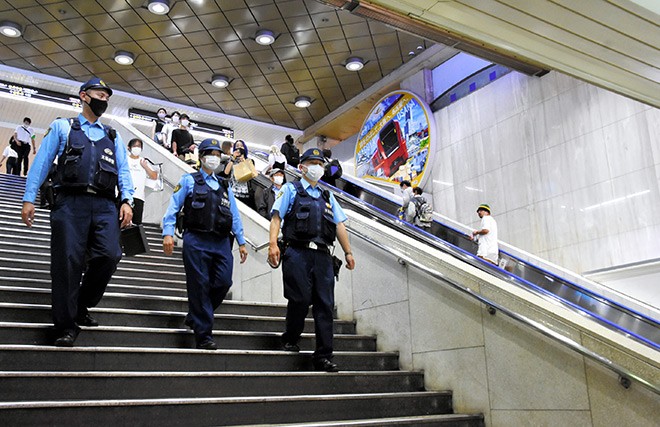 OSAKA--The scourge of “upskirt” photography has sharply increased partly because of the wider availability of remote-controlled miniature spy cameras that can be hidden in seemingly innocuous objects.

According to the National Police Agency, the number of cases of sneak photography in which offenders were arrested or referred to prosecutors in 2019 was 3,953, more than double the 1,741 reported in 2010.

In the first six months of this year, the figure increased by about 30 percent from the same period the previous year to 144, showing that incidents are occurring at an accelerating rate.

“Silent camera apps originally developed to quietly take photos of sleeping babies with smartphones are used in many cases," said Goki Jojima, chief of the community safety division at the Minami Police Station in Osaka.

In addition to smartphones, compact cameras hidden in pens, portable battery chargers and eyeglasses are used by perpetrators, officers at the police station said.

“The fact that small cameras have become easily purchasable online has contributed to the increase because they had previously been bought by private eyes and investigation firms by showing their IDs,” said Mika Kyoshi, 50, a crime prevention expert. “In some cases, a camera is hidden in the tip of a shoe or an umbrella.”

Perpetrators are most active between June and October, she added.

According to the Minami Police Station, the number of upskirting incidents doubles in summer from spring apparently because women are dressed lightly.

Osaka prefectural police have strengthened measures to crack down on the illicit photography.

On one weekday in early August, about 10 investigators from the Minami Police Station and elsewhere informed passers-by at Nankai Electric Railway Co.’s Nanba Station that many women in the area have been targeted for illicit photos and other sexual harassment.

Police also distributed illustrated fliers on how to avoid being upskirted, warning that walking while listening to music or looking at a cellphone could distract attention away from suspicious individuals.

Stricter regulations are also in place.

Prefectural police arrested a male corporate worker in the same month on suspicion of unlawful entry into the premises of a private house and using a smartphone to peep at a woman taking a bath.

“In some cases, such images go viral online and become irretrievable,” Kyoshi said. “Women are encouraged to keep a distance from people behind them on stairs or escalators and take other precautions to prevent voyeurism.”