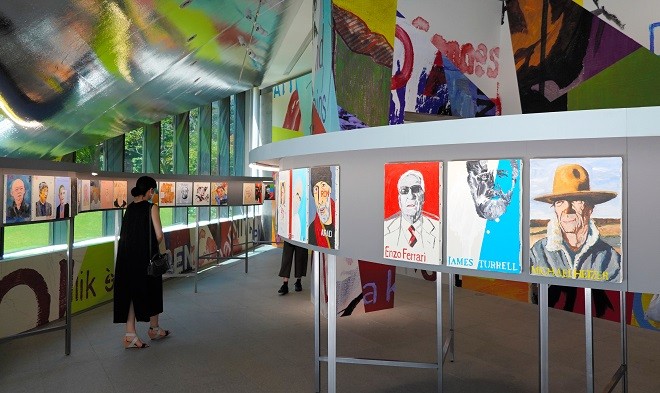 "Yokoo Tadanori: The Artists" showcases artists, philosophers, scientists and others associated with the organizer, Fondation Cartier pour l'art contemporain, from around the world.

Founded in Paris in 1984, the foundation boasts a collection of more than 2,000 items created by 500 artists from 50 countries.

Herve Chandes, who serves as general director, recalled that when he visited Yokoo's atelier and told the graphic designer he was preparing for the 30th anniversary of the organization in 2014, Yokoo was only too eager to join the celebration.

The artist came up with the idea of drawing portraits of people connected with the foundation, which Chandes thought was "fantastic."

Each portrait is drawn on a canvass measuring 33 centimeters by 24 cm.

None of the portraits share the same color combinations and composition, which Chandes said reflects Yokoo's artistic prowess. He added that the artist has a talent to draw the special movement he felt in his mind when he saw photos of them.

Yokoo said the portraits were based on photographs.

He also said he drew at least two for a part of the portraits because he wasn't satisfied with his initial attempts.

"I couldn't draw (film director) David Lynch well, so I went to see his autobiographical movie," the artist revealed.

The exhibition, which is being held in cooperation with The Asahi Shimbun, runs until Oct. 17. The venue is closed on Tuesdays.

For more information, visit the official website at (http://www.2121designsight.jp/en/gallery3/the_artists/).

(This article was written by Wakato Onishi, senior staff writer, and Takumi Ono.)