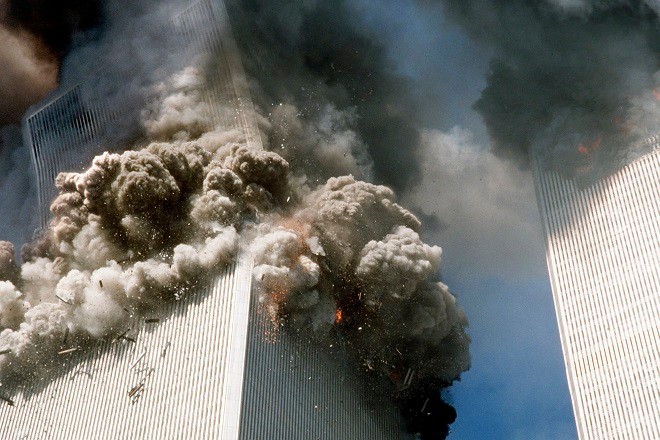 In this Sept. 11, 2001, file photo, the south tower of the World Trade Center, left, begins to collapse after a terrorist attack on the landmark buildings in New York. (AP Photo)

This Sept. 11 marks the 20th anniversary of the terrorist attacks on U.S. soil that violently shook the world.

Four passenger jets were highjacked that day and used as weapons in the unprecedented terror attacks against targets in the heart of the United States. Nearly 3,000 precious lives were lost.

The 9/11 attacks propelled what at the time was the world's sole superpower down the long path of war. The reverberations from the U.S.-led war on terror and consequent conflicts radically rocked the world order and, two decades on, we are now looking at a distressing global landscape.

The gloomy realties of the world include not just the “defeat” in the war. They also include the fact that the fight against terrorism has deeply undermined the principles of liberalism the United States and its allies pledged to protect in their fight against the threat posed by terrorism.

What have the United States and the international community learned from that harrowing tragedy? And what have they lost sight of? This landmark anniversary offers an opportunity to ruminate on these key questions.

DIVISION FROM FAILURE TO SEEK DIALOGUE

In his address to the nation that day two decades ago, U.S. President George W. Bush said, “America was targeted for attack because we’re the brightest beacon for freedom and opportunity in the world.” He sought to rally allies in the fight to “defend freedom.”

Nine days later, Bush presented a stark choice to the entire world. “Every nation, in every region, now has a decision to make. Either you are with us, or you are with the terrorists.” This was rhetoric based on blatant dichotomy that served only to divide the world into friends and foes.

While use of military force in Muslim regions has resulted in countless lost lives, the world balked at promoting crucial dialogue between civilizations. The upshot is a bitterly divided world filled with intolerance.

The United States has witnessed an endless stream of hate crimes. The Trump administration prohibited citizens of specific nations from entering the country and even erected a wall on its border.

In Europe, a rash of terrorist attacks spawned a wave of antagonism against Muslims and immigrants, which helped ultra-right political parties gain ground.

Many of the terrorists were children of immigrants born and raised in Europe. Prejudice against Muslims isolated them in their own countries and drove them to violence. The West has faced the threat of violence fed by a failure to promote national unity.

During the past 20 years, many lines of division have been drawn in the world, and they have become increasingly deeper and sharper. In light of this grim reality, the world needs to make fresh efforts to seek a peaceful and harmonious coexistence among multiple cultures and recapture a sense of tolerance.

The U.S.-led war on terror, driven by the notion that the battle to eliminate terrorism is a fight for justice, generated serious contradictions, especially in countries ruled by authoritarian regimes. In many of these countries, antigovernment forces were labeled “terrorist organizations” and crushed.

In Egypt after the “Arab Spring,” the military and other elements of the old authoritarian regime toppled an elected government. In Syria, the Damascus-based regime waged war on antigovernment forces, plunging the country into bloody civil war.

Opposition leaders have been persecuted in Russia. China brutally cracked down on ethnic minorities in areas like the Xinjiang Uygur Autonomous Region. Similar moves toward authoritarian rule under the pretext of fighting terrorism have gained steam in Turkey and the Philippines as well.

U.S. President Joe Biden contends that the primary challenge of international politics is ideological: democracy versus autocracy. But we should not forget that one of the contributing factors behind the growth in autocracy was the U.S. war on terror.

Many Western democracies have witnessed a serious erosion in the principles of rule of law and human rights.

The Guantanamo Bay detention camp, a U.S. military prison on the coast of Guantanamo Bay in Cuba, continues to operate despite revelations that “terror suspects” are detained for years in violation of due process of law.

In many countries, the fabric of daily life has come under threat from measures against terrorism that initially were seemingly benign in intent. Individual profiling based on specific factors such as ideology and religion, tracking people with security cameras and facial recognition technology and wiretapping have become widespread practices that have encroached on the territory of privacy.

Since the 9/11 attacks, many nations have embraced the notion that ensuring security is a policy priority that must be pursued even at the cost of freedom. It is time to stop and reconsider this approach.

GOAL MUST BE A SUSTAINABLE WORLD

Efforts need to focus on tackling the root causes of terrorism lurking both at home and abroad. It is vital to do more to reduce disparities and poverty and denounce and remove any form of discrimination and suppression against specific races and religions.

These challenges cannot be solved by simply slamming the door and expanding monitoring at home while turning a blind eye to human rights violations in other countries.

Iranian-born filmmaker Mohsen Makhmalbaf, who depicted the situation in Afghanistan during Taliban rule in “Kandahar,” which was released immediately prior to the 9/11 attacks, once said the fate of Afghanistan could have been much better.

Afghanistan was a forgotten country, he pointed out. If the rulers had rained books instead of missiles on the people, he argued, ignorance, tribalism or terrorism would have not taken root and become rampant in the country. If they had planted wheat seeds instead of landmines, millions of Afghans would not have died or become refugees.

At that time, there were more than 6 million Afghan refugees. Sadako Ogata, who served as U.N. High Commissioner for Refugees from 1991 to 2000, lamented that the world was failing to pay serious attention to the humanitarian crisis. She was skeptical about the use of military power to root out terrorism, saying “Armed forces cannot offer an ultimate answer” to the problem. After she retired from her U.N. post, she devoted herself to supporting Afghanistan’s reconstruction.

The 9/11 attacks came as a rude awakening to the international community that no single country can secure its safety by itself in this age of globalization.

Like infectious diseases and climate change, terrorism is a formidable global challenge that cannot be tackled through competition among countries. The only way to eradicate terrorism is through effective international cooperation.

All nations need to discard inward-looking modes of thinking and pursue “human security” to ensure that everybody, irrespective of their nationalities, can live in hope and dignity. Such efforts can only lead toward a sustainable world. No country can afford to abrogate its responsibility in this regard.