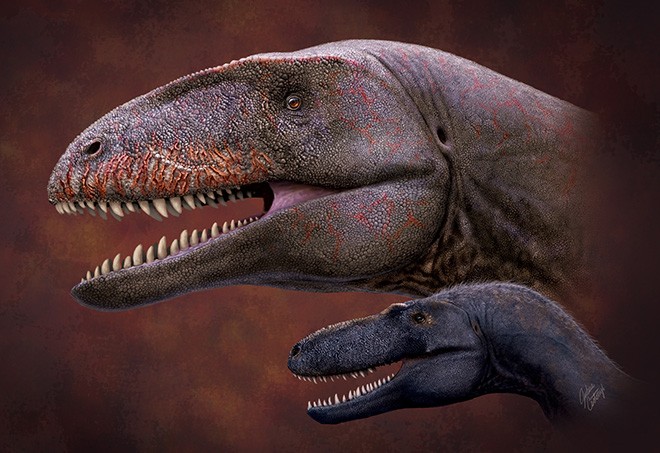 An artistic rendering of an ulughbegsaurus, with a Timurlengia in the foreground (Drawn by Julius T. Csotonyi)

Japanese researchers helped identify a fossil uncovered in central Asia as a shark-toothed carnivorous dinosaur that once roamed the land as an apex predator before the tyrannosaur rose to dominance.

The fossil was found in Uzbekistan from a layer of earth dating to the late Cretaceous Period about 90 million years ago.

The new species was named “ulughbegsaurus” by the team of researchers that included scientists from the University of Tsukuba and Hokkaido University. It is believed to be related to the carcharodontosaur.

“This is an important discovery when thinking about how dinosaurs moved about and spread their population,” said Kohei Tanaka, an assistant professor of paleontology at the University of Tsukuba, and a member of the research team.

The findings were published on the website of the British Royal Society Open Science on Sept. 8. The article can be accessed at https://doi.org/10.1098/rsos.210923.

The scientists focused on the fossil of an upper jaw stored at an Uzbekistan museum uncovered by a Soviet researcher. The fossil measures about 24 centimeters in length and about 13 cm high.

The fossil’s characteristics, such as its wrinkle pattern and humps, led the scientists to conclude it was from a new genus and species.

Comparing it with fossils from other dinosaurs led to the discovery that it was from a relative of the carnivorous carcharodontosaur because of its similar sharp teeth. The new dinosaur species is estimated to have been between 7.5 and 8 meters long and weighed about 1 ton.

That would make it the largest carnivorous dinosaur unearthed in Uzbekistan.

The scientific name of Ulughbegsaurus uzbekistanensis is taken in part from Ulugh Beg, a Timur sultan from the 15th century, who was also a noted astronomer and mathematician.

Dinosaurs such as the carcharodontosaur are believed to have grown as large as about 13 meters in length.

They disappeared from the Northern Hemisphere by the late Cretaceous Period, as tyrannosaurs displaced them and grew even larger.

It is still uncertain exactly when the tyrannosaurs overtook the carcharodontosaurs.

Fossils of a primitive form of tyrannosaur, known as the Timurlengia, have been found in layers of earth from the same period as the latest finding. The carnivorous Timurlengia was only about 3 to 4 meters in length and weighed about 170 kilograms.

This is the first finding from the same layer of earth in Asia of fossils for specimens related to a large carcharodontosaur and a small tyrannosaur.

One earlier theory was that carcharodontosaurs in East Asia disappeared much earlier than their relatives in other regions such as North America. One finding backing that hypothesis is the discovery of a fossil of a relative to a tyrannosaur that grew to be about 8 meters long. It was exhumed from a layer of earth dating back about 125 million years ago in China.

According to Makoto Manabe, a deputy head of the National Museum of Nature and Science, one distinct characteristic of carcharodontosaurs is their thin but sharp shark-like teeth.

Some of the fossilized teeth uncovered in Uzbekistan up to now were believed to be from relatives of tyrannosaurs. They share that same characteristic, so it is possible those fossils may actually be teeth from the ulughbegsaurus.

Manabe said finding fossils from other parts of the ulughbegsaurus could provide a better understanding of what it looked like in its entirety.

He added that this could also help answer the question of when and how the tyrannosaurs reached the top of the food chain in Asia.