Decimal system in use in Japan well over 2,000 years ago 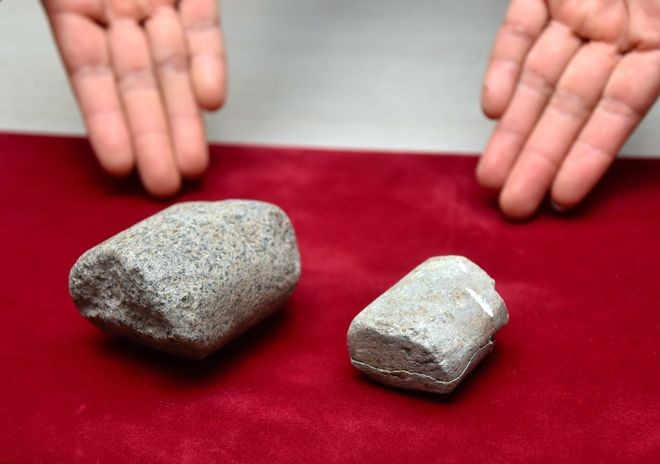 Artifacts newly identified as a decuple weight, right, and a trigintuple weight shown at the Nakoku-no-Oka historical museum in Kasuga, Fukuoka Prefecture, on Sept. 1 (Junko Watanabe)

Researchers identified what is known as a decuple weight with 10 times the reference unit mass of 11 grams among artifacts unearthed at a series of archaeological sites collectively known as the Sugu group, where many measurement weights have previously been discovered, the Kasuga municipal board of education said.

Board officials said Sept. 1 that the decuple weight, the first artifact of its kind to be found in Japan, offers valuable insight into Yayoi culture.

The stone, which is cylindrical in shape, weighs 116.3 grams.

Unearthed in 1989 from the Sugu-Okamoto archaeological site, the artifact was recently re-examined by researchers who included Junichi Takesue, a Fukuoka University professor emeritus of archaeology, who identified it as a measurement weight.

The object was likely used with a set of scales, he said.

The archaeologists identified another artifact from the same site as a trigintuple weight, with 30 times the reference unit mass.

Weights with 1, 3, 6, 20 and 30 times the reference unit mass were identified last year among artifacts previously found at the Sugu sites.

The Sugu site group is believed to have formed a core part of the early Japanese state of Na, which is mentioned in “Weizhi Worenzhuan,” a section of a Chinese history book dating from the third century.

It is believed a bronzeware workshop was located near the site where the decuple weight was unearthed. Researchers speculated that the weights may have been used to weigh copper and lead used for the mix.

“This latest find shows beyond all doubt that the area here was an advanced zone, a sort of ‘technopolis’ of the Yayoi Pottery Culture Period, and that the Yayoi people were using the decimal system,” Takesue said.

The decuple weight was set to be displayed, along with a set of other weights, as part of a special exhibition at the Nakoku-no-Oka (state-of-Na hill) historical museum in Kasuga from late August. However, the museum remains closed due to a COVID-19 state of emergency declared for Fukuoka Prefecture.

In light of this, the museum on Sept. 1 began displaying images of the weights on its website. The online exhibition, annotated in Japanese, runs through Sept. 26.