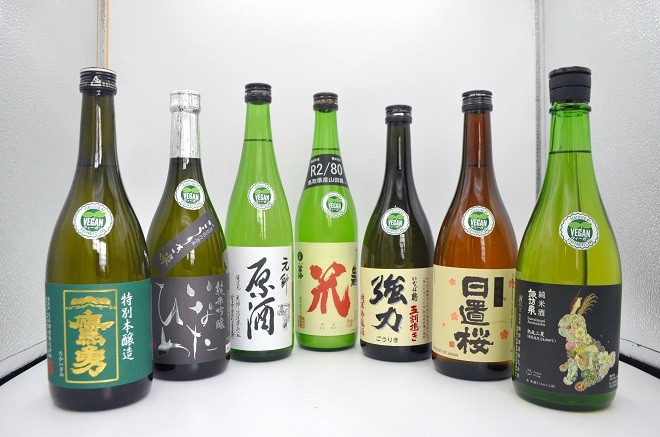 Produced by a team of seven breweries in Tottori Prefecture, vegan-certified sake varieties intended for export to India are unveiled at Suwa Shuzo Co. in Chizu on July 19. (Kazuhiko Ishikawa)

CHIZU, Tottori Prefecture--Even though the sake-making process relies purely on fermented rice, seven breweries in Tottori Prefecture took the unusual step of seeking vegan certification for their products in a quest to break into the Indian market and win over the country's hundreds of millions of vegetarians.

As a first step, the companies formed a team to coordinate their efforts to obtain vegan certification, deeming it vital to put the minds of vegetarians in India at ease that their products are not contaminated with animal flesh.

Founded in April this year, the team is led by Norio Inoue, the president of an internet connection service provider in Tottori city, the prefectural capital.

Inoue came up with the project after an Indian acquaintance sought his advice about exporting Japanese sake to his home country. Inoue approached Masahiko Toda, another fellow acquaintance who serves as director at Suwa Shuzo Co. here.

According to the team, an estimated 30 percent of India's 1.4 billion population is vegetarian.

It received vegan certification from VegeProject Japan, a Tokyo-based nonprofit organization, to spur its export drive into this largely untapped market for sake.

The team intends to create a digital guide to introduce each brewery's products and deliver sample products to India. It also plans to host an online business meeting in fall to explore business opportunities in India.

The members asked Mika Eoka, who lives in Tokyo and promotes Japanese sake in India, to serve as export coordinator.

"We want to work together with each brewery and realize our export dream," Toda said. "We also want people of India to become interested in Tottori (Prefecture) to help draw tourists. I think it could prove to have a good influence on domestic sales if more people become curious about Tottori sake selling well in India."