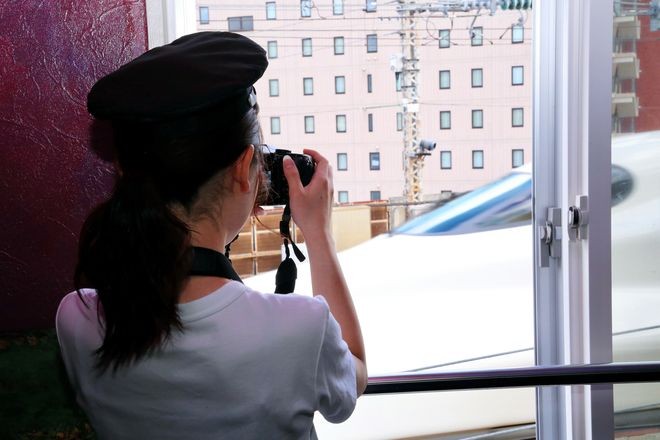 OSAKA--Hurt by a sharp drop in bookings due to its name, Osaka Corona Hotel here found a way to partly recoup losses by promoting its close proximity to the Tokaido Shinkansen Line.

Train buffs quickly seized on the opportunity to stay in Room No. 523, touted as the "Shinkansen View Room" as it is only 6 meters from the elevated tracks where the high-speed trains run from early morning to late at night.

The budget hotel in the city's Higashi-Yodogawa Ward said noise from the rattle of passing trains was reduced by installing double-glazed windows.

Still, some guests ask to be put up in a different room, complaining that vibrations caused by passing high-speed trains can prove annoying.

The hotel found itself struggling after the novel coronavirus pandemic hit because the word "corona" is included in its name.

But when it started offering the Shinkansen View Room in August in a quest to survive, it found itself inundated with inquiries and reservations.

The room is equipped with train driver caps, slippers made from the same material used for bullet train seats and books about Shinkansen services. Images of bullet trains are featured on the wallpaper.

"You can enjoy Shinkansen all to yourself without being part of a crowd," a hotel representative said.