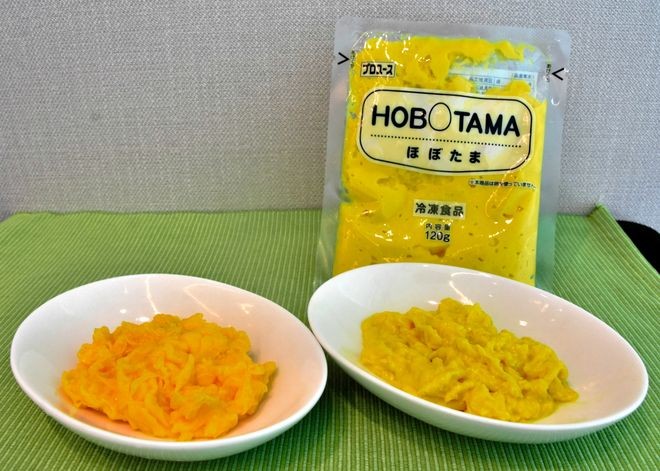 A new seafood bowl proved instantly popular after it was put on the menu of the Cabinet Office’s cafeteria in Tokyo.

What appears to be flavored salmon roe in the bowl consists of the Mizutamago mixture of powdered konjac and extract of sea tangles developed by a firm in Kumamoto Prefecture. The fake spawn was placed in soy sauce to replicate the actual roe’s taste and touch.

It is also served at a “soba” noodle restaurant in Tokyo, starting in September.

Meat, seafood and other zooidal food products are increasingly being replaced by their botanical counterparts amid the trend to increased environmental consciousness.

Not only imitation meat made of soybeans but also cheese, eggs and even sashimi created from other ingredients have successively been pitched. As more consumers choose those alternatives, food makers hold high expectations for the new market.

Kewpie Corp. in June released its Hobotama fake scrambled eggs. While the article uses soybeans as its material, Kewpie’s expertise in mayonnaise production was fully taken advantage of so as to reproduce the appearance and sensation in the mouth of eating soft-boiled eggs.

Hobotama is available only for hotels, fast food restaurant operators and other corporate customers for the time being, and is almost triple the cost of their counterparts prepared with actual eggs for such patrons.

However, Satomi Kaji, a Kewpie official involved in Hobotama’s development, pins her hopes on the business.

“The egg substitute market will grow in scale,” Kaji said. “We will consider devising other egg-related products as well.”

J-Oil Mills Inc. in September started selling alternatives for cheese and butter imported from a food manufacturer in the Netherlands at supermarkets in Tokyo and six prefectures in the Kanto region around the capital.

Substances deriving from such materials as fava beans were combined with coconut oil so that the fake products feel and melt in the mouth the same way as real cheese and butter.

Azuma Foods Co., a seafood products maker in Mie Prefecture, is expected to market substitutes for tuna and salmon sashimi made mainly of konjac powder as part of its Marude Sakana series by the end of September on its shopping site.

Driving the spread of food alternatives is the raised environmental awareness of consumers and industrial communities.

As greenhouse gas emissions produced in raising livestock, deforestation, seafood overharvesting and natural resources depletion are deemed as major problems, the use of plant-connected substances is seen as lessening the environmental burden.

An increasing number of vegans in Europe, the United States and elsewhere are shying away from animal-linked foodstuffs, inspiring many restaurants to take similar steps.

With advanced food processing technology, it is now possible to create flavors more similar to those of actual food items in various fields, likewise giving momentum to the creation of imitation dishes.

Fake meat products utilizing soybeans--a category leading the pack in development--can be frequently found on the menus of large eatery chains these days.

In one case, materials in a meal were all replaced.

The Ippudo ramen chain in February this year offered a limited-time-only bowl free from animal ingredients on sale at some outlets. For the plant-based specialty, soybean meat took the place of roast pork and soya milk substituted for pork broth.

(This article was written by Takumi Wakai and Shinya Takagi.)