VOX POPULI: Afghanistan must not turn the clock back 20 years for women 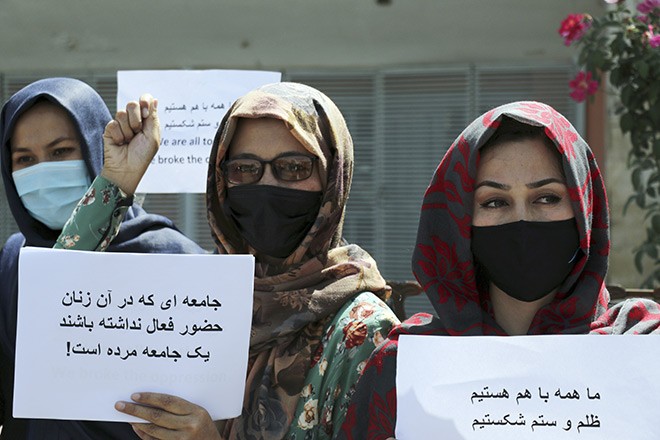 Women gather to demand their rights under Taliban rule during a protest in Kabul on Sept. 3. (AP Photo)

In “The Breadwinner,” a 2017 animated film set in Afghanistan under Taliban rule, Parvana, an 11-year-old girl, is harassed by men when she goes out.

“No woman should ever be out alone,” she is told. “No girl must go shopping without being accompanied by her father.”

The protagonist returns home dejected as she can neither draw water from a community well nor buy food on her own.

Her father had been taken away by the Taliban, leaving the family without its breadwinner.

Parvana decides to survive by passing herself off as a boy. She crops her hair, dresses accordingly and changes her name to support her family.

Her plight reminded me of a woman in her 20s I interviewed in Kabul in 2001.

As a young mother, she lamented the inconvenience of being clad in a burqa, a garment covering the entire body, which the Taliban forced all women to wear.

When she first donned the face veil, the woman recalled, her field of vision was so narrow that she stumbled and fell. She could not even recognize her friends when passing them on the streets.

I met her shortly after the collapse of the Taliban regime amid the U.S. invasion of Afghanistan.

But she said, “I am still afraid to shed the burqa because I don’t know if the U.S. forces can really wipe out the Taliban.”

Unfortunately, her fear has been justified two decades on.

Tomorrow will mark the 20th anniversary of the Sept. 11 terror attacks on U.S. soil.

The Taliban seized control of all of Afghanistan as the U.S. forces withdrew from the country.

America’s “righteous war” ended after copious bloodshed and its attempts to build a democratic nation have amounted to nothing.

Thinking of the past two decades, I cannot help but feel a sense of waste.

I remember the magnificence of the star-studded sky I saw over Kabul.

In that beautiful country, will girls once again have to cut their hair and live under false names to survive?

The clock must never be turned back 20 years.