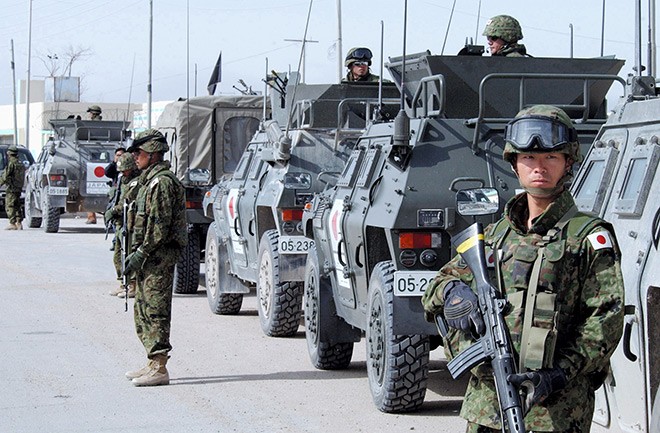 Japan’s foreign and security policies have focused on closer cooperation with the United States during the two decades since the Sept. 11 terror attacks.

But Japan has not shown a clear diplomatic vision of its own. The government is also unwilling to review deployments of Self-Defense Forces to support the U.S.-led war on terror.

The U.S. forces have withdrawn from Afghanistan, leaving the country in confusion. The U.S. wars in Iraq and Afghanistan can only be summarized as historical mistakes.

The Japanese government has deployed SDF troops to these areas in response to Washington’s requests. Tokyo should review these policy decisions.

It has the obligation to take a hard look to identify the problems and lessons of its decisions. It should disclose the results of its postmortem to the Japanese people and the international community.

Up until 20 years ago, the SDF’s overseas activities were mostly part of United Nations peacekeeping operations.

After the United States began global military mobilizations in response to the 9/11 attacks, Japan swiftly shifted the focus of its overseas SDF deployments from supporting U.N. efforts to backing U.S. operations.

During the Afghan war, Japan enacted the antiterrorism special measures law to deploy Maritime SDF vessels to refuel ships of other countries in the Indian Ocean.

After the U.S. and British forces started the invasion of Iraq, which was not sanctioned by the U.N. Security Council, Japan supported the moves and deployed Ground SDF troops to Iraq under another special measures law.

The two wars ended up losing their rationale and causing huge losses of human lives. In Iraq, no weapons of mass destruction were found, while in Afghanistan, militant groups have resurged.

The SDF operated in the Indian Ocean for eight years and in Iraq for five years. Japan has spent $6.9 billion (about 760 billion yen) to help rebuild Afghanistan.

As it is failing to re-examine the nation’s role in the war on terror, the Japanese government is abdicating its responsibility for its policy decisions and actions.

Recent revelations of cover-ups in daily logs of the GSDF during its operations in Iraq underscored the government’s reluctance to disclose information.

In Britain, the Iraq Inquiry Committee, an independent investigative body set up by the British government, released a report that harshly criticized mistakes London made in its judgments and assessments with regard to Britain’s role in the conflict.

More than anything else, the SDF’s participation in the U.S.-led war on terror raised serious constitutional issues.

During Diet debate, the government claimed the plan to send SDF troops to Iraq did not constitute a violation of Article 9 of the Constitution because the SDF would operate only in “noncombat zones.” But shells were fired many times at the GSDF’s camp in the southwestern Iraqi city of Samawah.

The government went so far as to enact new national security legislation, which allows Japan to exercise its right to collective self-defense, after making many overstretched interpretations of the Constitution to justify a policy change that was once regarded as unconstitutional.

These developments have delivered a serious blow to Japan’s traditional principle of sticking to a strictly defensive defense policy.

The security environment surrounding Japan has become fraught with risks due mainly to China’s rise as a military power.

There is no doubt about the importance of the alliance with the United States for Japan’s security. But the past 20 years have clearly shown that Washington can make serious mistakes.

Japan’s delicate position between the United States and China makes it all the more important for Tokyo to act on its own analyses and policy principles to seek regional stability. This balancing act requires assessments of its role in the U.S.-led wars.

The Japanese government should scrutinize its decisions and actions and provide sufficient information clearly to the public through inquiries by a British-style independent committee or the Diet.

Unless it does so, Japan cannot map out a better security strategy for the future.