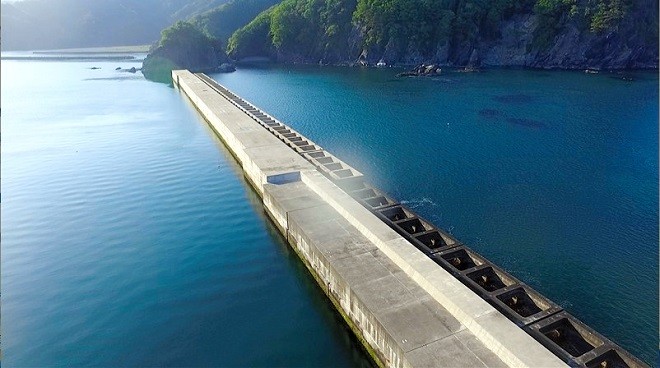 A wave-based power generating unit will be set up on the breakwater at the mouth of Kamaishi Bay in Kamaishi, Iwate Prefecture. (Provided by the Kamaishi Otsuchi Industrial Research Development and Training Center)

KAMAISHI, Iwate Prefecture--This northern city that was heavily damaged by the 2011 tsunami is now looking to generate renewable energy by harnessing the power of the sea.

A local breakwater rebuilt after sustaining damage in the aftermath of the Great East Japan Earthquake will become the site for the new wave power project.

“We will use waves, which brought about a disastrous tsunami, in order to revitalize the local community at this time,” said Junichi Ogasawara, a project coordinator at the Kamaishi Otsuchi Industrial Research Development and Training Center.

Officials hope their idea will eventually become a model for other fishing ports and remote islands nationwide.

“Though only a small amount of power can be produced with this method, its completion will allow remote islets outside Japan to rely on the method,” Ogasawara said.

The project is being spearheaded by a business called Marine Energy Co., which is funded through four companies, including a marine engineering firm and an electrical work company in Kamaishi.

The plan is to set up equipment measuring 10 meters long and 15 meters wide on the breakwater at the mouth of Kamaishi Bay.

When the waves move up and down vertically and diagonally, they will send air through a duct. That air will rotate a turbine generator to produce electricity.

Artificial intelligence will predict and control the strength of the waves so that the generator operates efficiently.

The annual output target is 333,000 kilowatt hours, enough to cover the energy consumption of 83 ordinary households.

The relatively small volume of power will be kept and used locally at harbor facilities, systems that monitor stationary nets and other devices related to fishing. The generator will be able to provide power to other sources elsewhere during emergencies.

The Environment Ministry commissioned the effort to contribute to reducing carbon dioxide emissions.

A total of 400 million yen ($3.6 million) will be allocated, from this fiscal year through fiscal 2022, toward installing a single generator for technical development and verification tests. Five power-generating units will eventually be introduced under the plan.

The central government selected Kamaishi in 2015 as an experimental field for maritime renewable energy production, and the city has since committed to conducting oceanic tests for wave power electricity generation.

A device that floated on the sea was being used for tests until fiscal 2018, but it could not be put into practical use due to costs and safety reasons.

In this latest trial, the Research Center for Advanced Science and Technology from the University of Tokyo, and another organization focused on generating electricity from wave power, will also take part.

They have experimented with creating energy from waves through a blowhole dug into the bedrock in Echizen, Fukui Prefecture, and plan to test a similar system on this barrier at the mouth of the bay.

The four companies in Kamaishi will confirm the equipment’s design and safety before it is put into practical use. The generator unit will be put in place in June next year to run for periods of nine months at a time.

Project officials hope to reduce expenses and improve the equipment’s performance by 2025 so it can be mass-produced. The idea is to have other municipalities and fishing ports with seawalls incorporate the system across the country by 2030.