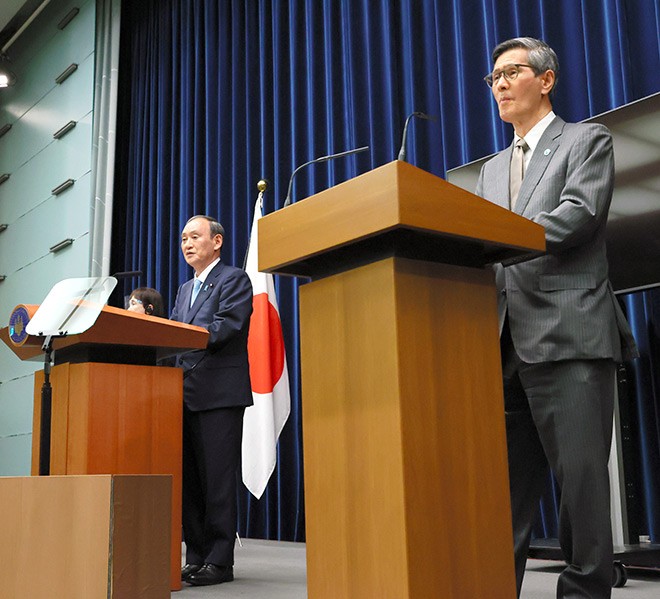 The government extended its COVID-19 state of emergency for Tokyo and 18 other prefectures on Sept. 9 until Sept. 30, while adopting new guidelines relaxing the requirements for lifting it, which it aims to do three weeks later.

Until now, lifting the state of emergency was based on whether the number of new cases dropped below 25 patients per 100,000 people for a week.

But under the newly enacted guidelines, the government will prioritize whether the number of new cases trends downward for two weeks as a criteria for lifting the emergency.

“Having more than 25 patients (with COVID-19) per 100,000 people no longer means that the medical institutions will be strained immediately,” Shigeru Omi, chief of the government’s expert panel on responses to the coronavirus health crisis, said at a Sept. 8 news conference. He noted that more people have been vaccinated and the ratio of patients who have developed serious symptoms has dropped.

“If the number of patients continues to decrease, the severely strained medical care situation is expected to improve considerably by the end of this month,” Yasutoshi Nishimura, the minister who heads the government’s response to the COVID-19 pandemic, said at a COVID-19 expert panel meeting on Sept. 9.

Based on the new guidelines, which place more importance on the level of strain on medical institutions, he said he was willing to lift the state of emergency for Tokyo and 18 other prefectures three weeks later.

In a clear policy shift, the government also revealed measures to soften restrictions on businesses and the public in the mid to long term related to combating the virus.

While eating and drinking establishments will continue to be asked not to serve alcoholic beverages in Tokyo, Osaka and elsewhere placed under the state of emergency, in areas covered by the pre-emergency measures, requests for them will be relaxed if the infection situation improves.

Currently, governors of such areas can let restaurants and bars provide alcoholic beverages until 7 p.m., but from now they can permit certified establishments to do so until 8 p.m.

The government lifted the state of emergency for two prefectures based on new criteria.

Hospital bed occupancy rates as of Sept. 7 were under 50 percent in Miyagi and Okayama prefectures where the state of emergency will end on Sept. 12, according to a document presented by the Cabinet Secretariat on Sept. 9.

The number of patients self-isolating at home or waiting to be told where they should self-isolate, an indicator used to assess the level of strain on public health centers, also cleared the new requirement of 60 patients per 100,000 people in the two prefectures.

In addition, there were relatively fewer cases in which ambulance teams had difficulty finding hospitals that would accept COVID-19 patients.

In some such cases, ambulances had to call medical institutions more than four times to find ones to accept patients and were forced to remain more than 30 minutes at sites until they found hospitals.

TOKYO TO EXIT EMERGENCY IF DAILY CASES FALL TO 1,000

Some local governments opposed the change in criteria for lifting the state of emergency, however, saying, “The target we are aiming at will become unclear,” as using the number of new daily cases as an indicator makes it easy to understand the situation regarding infections.

The expert panel did not clearly reveal an exact number for lifting the state of emergency under the new guidelines, but they indicated a basic guideline of “about 50 patients per 100,000 people for a week” in metropolitan areas. In the case of Tokyo, that would mean a level of 1,000 patients per day.

The rate of patients with severe symptoms was 3 percent among patients recuperating at hospitals and elsewhere on May 25, the peak day before Japan’s “fifth infection wave.” But the figure on Sept. 1 was 1.4 percent.

The vaccination rate is expected to increase further.

“The number of new cases could bounce back, but the number of patients with serious symptoms will go down,” one expert said. “Now, it is a turning point to shift to a policy of co-existing with the new coronavirus.”

Satoshi Kamayachi, the government’s expert panel member and executive board member of the Japan Medical Association, said that as more beds have been secured, “we have more medical care capacity for sure.”

But he reiterated that the number of new cases per day is still important as a guideline.

“If the number of new patients increases sharply, a certain number of patients will develop serious symptoms,” he said. “It is possible that some patients with other illnesses could not receive medical care in the future.”

(This article was written by Hiroshi Ishizuka and Kayoko Geji.)