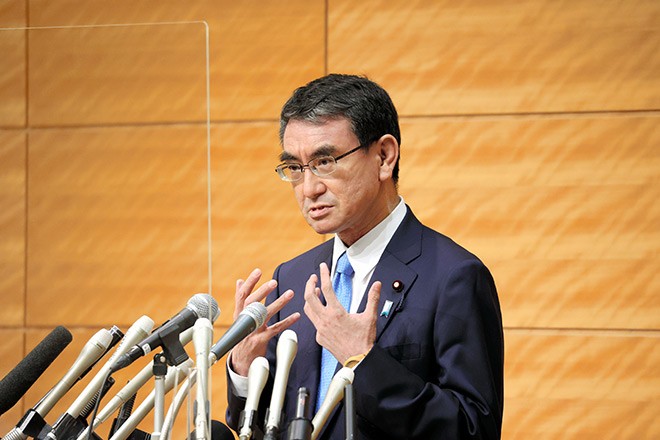 Taro Kono, the state minister in charge of administrative reform, holds a news conference on Sept. 10 to announce he is running in the Liberal Democratic Party presidential election. (Koichi Ueda)

Taro Kono, the man leading Japan’s vaccine rollout, said if he becomes prime minister, he will work to create a “warm society” where everyone supports one another.

Kono, 58, the state minister in charge of administrative reform, announced at a news conference on Sept. 10 that he is entering the ruling Liberal Democratic Party’s presidential election, to be held on Sept. 29.

“I want to receive the thoughts and concerns of the people, share information and send a solid message to overcome the crisis we face while working together with everyone,” Kono said.

Kono said the LDP is a conservative party, and in his view conservatism is a very generous, yet moderate and warm ideology.

“The foundation of Japan is the imperial family and the Japanese language that has been sustained by a long tradition, history and culture.”

He touted his work in the Cabinet of Prime Minister Yoshihide Suga to reduce bureaucratic red tape through decreasing Japan’s reliance on “hanko” seals for administrative procedures, as well as his efforts coordinating the rollout of COVID-19 vaccines.

“I envision a situation in which everyone can reach what they are striving for if they extend their hands out a little,” Kono said. “I want everyone to make that effort because such efforts will produce results. That is the kind of nation I want to create.”

This is the second time for Kono to run in an LDP presidential election. He was unsuccessful in the 2009 election, when the LDP was still in opposition.

In that election, he championed moving away from factional politics. But he ultimately lost to Sadakazu Tanigaki.

Kono’s father, Yohei, once served as LDP president. But, like Tanigaki, he never became prime minister.

Under Prime Minister Shinzo Abe, Taro Kono served as both foreign and defense minister, as well as state minister in charge of administrative reform. Suga reappointed him to that portfolio in September 2020.

Kono had gained a reputation for opposing nuclear power, in particular regarding the issue of spent nuclear fuel.

However, in his news conference, Kono said he would allow for nuclear power plants to resume operations, so long as they are confirmed to be safe.

He said to achieve net zero emissions of greenhouse gases by 2050, a goal set by Suga, coal- and petroleum-fired thermal plants would first have to be shuttered.

“The first thing would be to thoroughly implement energy conservation measures, followed by introducing renewable energy sources as much as possible,” Kono said. “But if we still fall short, we will resume operations at nuclear plants confirmed to be safe. I believe that is the most realistic course to take.”

Kono is the third lawmaker to throw their hat into the LDP presidential race, following Fumio Kishida, a former foreign minister, and Sanae Takaichi, a former internal affairs minister.