EDITORIAL: Suga urged to candidly assess his failures and achievements 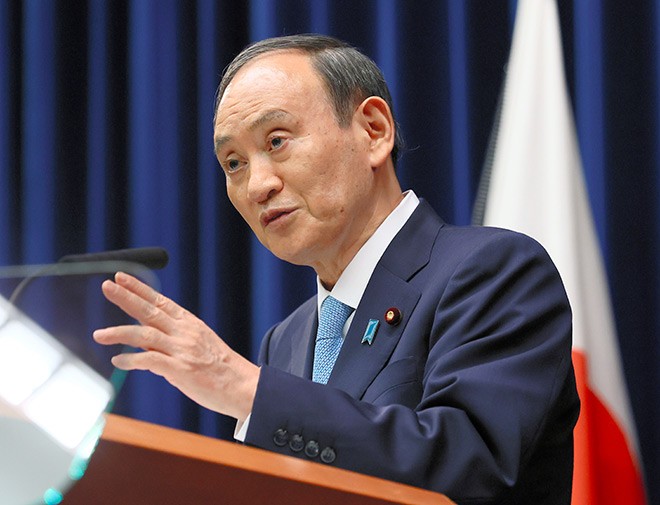 At his first news conference after he announced his resignation, Prime Minister Yoshihide Suga lapsed into his usual uncommunicative mode when confronted by uncomfortable questions.

The way he avoided speaking candidly about his brief tenure underscored his tendency to disregard the importance of explaining policy decisions and evading tough questions when possible.

Suga should arrange for another opportunity to offer his insights into his administration, which fell into the morass of incompetence in just one year, and give straightforward answers to questions about his achievements and failures.

Suga called the Sept. 9 news conference to announce his decision to extend the COVID-19 state of emergency for 19 prefectures. He reiterated that he will not run in the ruling Liberal Democratic Party's presidential election on Sept. 29.

He also enumerated his policy achievements during his one year in office, including setting a target for achieving carbon neutrality by 2050, the creation of a new Digital Agency and cuts in fees for wireless services.

Suga unveiled his surprise decision not to join the LDP leadership race at an emergency meeting of the party’s top officials last week.

He later broke the news to reporters, saying he had opted not to run to concentrate on policy efforts to deal with the novel coronavirus pandemic.

But he only announced his decision unilaterally in a two-minute meeting with reporters and refused to take any questions.

“I intend to hold a news conference, possibly next week,” he said by way of explanation.

On Sept. 9, Suga spoke about his resignation during a news conference held primarily to give updates on the government’s policy responses to the pandemic. He clearly failed to recognize the weight of his decision as prime minister to step down.

At the news conference, Suga said he would need “a tremendous amount of energy” to compete in the LDP leadership race while carrying out his duties as prime minister and dealing with the pandemic.

In citing reasons for his decision, he also referred to the fact that the health crisis does not lend itself to the lifting of the state of emergency on Sept. 12 as planned.

But his words sounded hollow, as it is widely believed that he abandoned hopes of serving a second term after it emerged that all possible political maneuverings to remain in power, including reshuffling the LDP’s top brass and dissolving the Lower House for a snap election, proved unworkable.

On Sept. 9, Suga stressed that he had tackled some policy challenges head-on that could not be avoided.

He pointed out that he had raised the ratio of medical costs that elderly patients with a certain level of income must pay out of their own pockets to 20 percent and given the go-ahead for  the release of tons of treated radioactive water from the crippled Fukushima No. 1 nuclear plant into the Pacific Ocean.

As for the Tokyo Olympics and Paralympics, he said Japan had fulfilled its responsibility as host country.

As usual, he cut short his news conference after about an hour, even though reporters had more questions to ask. This did not allow him to engage in in-depth discussions about an evaluation of his policies.

A group of news organizations belonging to the press club of the prime minister’s office, including The Asahi Shimbun, made an advance request for securing sufficient time to ask the prime minister questions during the news conference. But the request was not granted.

“A political leader has a duty to explain his or her policies to the public to seek their support, although I have been unable to do the job properly,” Suga stated.

If he truly believes that, he should speak more about his political performance at the Diet or at a news conference. It is still not too late.

To ensure constructive and meaningful policy debate during the leadership race, Suga should reflect on his one year in office and clarify challenges that need to be tackled, as well as lessons that should be learned.