U.S. base deemed at fault for high levels of PFOS in Okinawa sewage 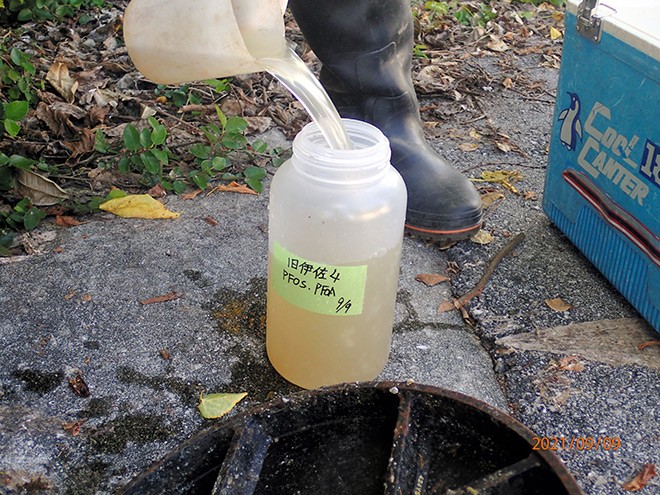 Ginowan municipal government authorities announced the finding on Sept. 10 and said further studies would be carried out to clarify if the base in the center of the city was indeed responsible for the high levels of perfluorooctane sulfonic acid (PFOS).

According to city officials, the U.S. base began releasing the water into the Ginowan sewage system around 9:30 a.m. on Aug. 26. At 11:10 a.m. or so, city officials collected water samples at a site outside the base where sewage passes through.

City officials said they were unable to determine a direct causal effect because sewage at the site where the water was collected also contains wastewater released from the base.

Before the water was released into the sewage system, U.S. military officials said it had been processed so that the level of PFOS was brought under 2.7 nanograms per liter.

“I am just staggered at the extremely high concentration level,” Ginowan Mayor Masanori Matsugawa told a Sept. 10 news conference after the latest finding. “At the present time, we cannot definitively say the results were due to the release by the base, but because the Okinawa prefectural government is also conducting its own study, we want to assess the problem after their results are released.”

Another check of water quality will be done on a sample collected from the same location on Sept. 9.

The Okinawa prefectural assembly convened a plenary session on Sept. 10 and unanimously passed a resolution of protest over the release of water by the U.S. military as well as an opinion paper addressed to Prime Minister Yoshihide Suga.

The document called for an explanation of the U.S. military's decision to go ahead with the water release while discussions on the issue were continuing between Japan and the United States. It also called on the central government to conduct a study within the premises of the Futenma base.

The protest resolution said the assembly found the situation intolerable at a time when local residents had still not overcome their concerns about the leakage of firefighting foam containing PFOS from the Futenma base into a nearby river in April 2020.

Another opinion paper was also passed that unanimously called on the U.S. military to suspend flights of MV-22 Osprey transport aircraft until measures are taken by the Japanese and U.S. governments to prevent a recurrence of an Aug. 12 incident in which parts of an Osprey based at Futenma fell off in flight.