Municipalities scrambling to set up vaccine sites for young people 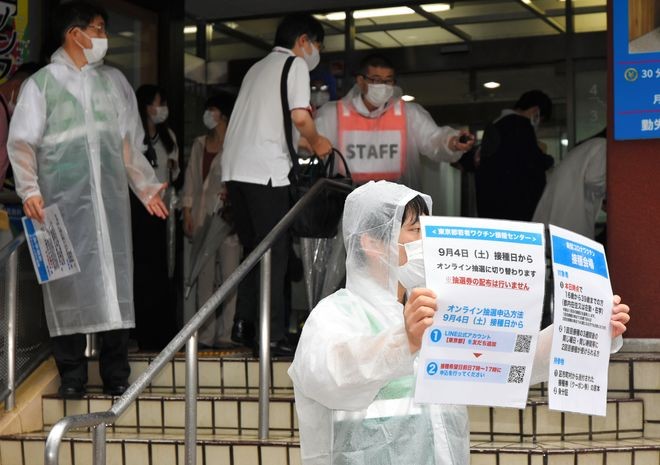 With many young people requesting tickets at the vaccination center in Tokyo's Shibuya Ward on Sept. 3, a staff member informs them about an online lottery system. (Naoko Kobayashi)

With younger patients accounting for a large portion of new infection cases and some in their 20s dying of COVID-19, municipal officials are now accelerating vaccination efforts for those in their 30s or younger.

Previously, many local governments had prioritized getting elderly people vaccinated because they were at risk of developing severe symptoms.

However, officials were forced to change course as the novel coronavirus continues spreading rapidly mainly among younger people.

In Tokyo's Shibuya Ward, the metropolitan government set up a special vaccination center for people in their 30s or younger to reduce new infection cases because they account for 60 percent of those who have tested positive.

To encourage young people to drop by without feeling pressured, no reservation was required at the site to receive vaccinations on a first-come, first-served basis when it opened on Aug. 27.

However, more people came to the venue than expected the first day. The metropolitan government shifted to a lottery system the next day, but at least 2,000 youths formed a long line to obtain tickets hoping to get a shot.

After the government came under fire for letting large crowds form around the venue, it shifted to an online lottery system for doses to be administered from Sept. 4.

"The lottery became more difficult to win after it became easier to apply online," a metropolitan government official said.

According to the metropolitan government, it is impossible to increase the number of shots per day because only four booths can be set up at the Shibuya venue: two for medical consultations and the other two for vaccinations.

For that reason, the metropolitan government decided to include those in their 30s or younger to be vaccinated at the north and south observatories at its office building in Shinjuku Ward, which are used to vaccinate restaurant staff, garbage collectors and other essential workers, and at the WeWork Nogizaka shared office in Minato Ward.

It also started giving shots to third-year senior high school students preparing to take university entrance exams or embarking on job searches at four venues in Fuchu and Tachikawa in western Tokyo and in Chiyoda Ward.

"As a result, we had failed to confirm that so many young people wanted to be inoculated," a senior official said. "I think that an increasing number of young people are feeling uneasy because some of them have developed severe symptoms."

The lessons learned from the Shibuya case has prompted authorities to set up vaccination sites for young people in many areas around the country.

On Sept. 4, the central government started accepting youths aged between 18 and 39 to receive shots at a mass vaccination center run by the Self-Defense Forces in Tokyo until Sept. 25.

According to the Defense Ministry, it allocated a total of approximately 22,000 slots, which were filled in a little more than two hours after it started taking reservations at 6 p.m. on Sept. 3.

The SDF-run vaccination center in Osaka started inoculating young people in the same age bracket on Sept. 11. The 6,000 shots allocated until Sept. 25 were fully booked in seven minutes after the ministry began to take reservations on Sept. 10.

The Aichi prefectural government opened a mass vaccination center with about 550 slots per day in the busy Sakae district in Nagoya on Sept. 11.

There is no age limit, but it is obviously aimed at young people. Although it was initially meant to operate as a walk-in venue, it was switched to a reservation-only site after the chaos in Shibuya.

"Even if it meant they would have to wait in line for a little while, we gave priority to convenience," a senior prefectural official said. "We never thought young people would be interested in (vaccinations) that much."

According to the prefectural government, more than 80 percent of reservations were made by people under age 40 as of Sept. 11.

The Okinawa prefectural government also started giving shots on Sept. 8 to those in their 20s and 30s living in the southernmost prefecture at two of three vaccination sites on Wednesdays and Saturdays, in principle. Two hundred people can receive a shot per day at each of the venues on a first-come, first-served basis.

The Fukui prefectural government has allocated about 2,200 slots for those aged between 12 and 39 to be inoculated at a workplace inoculation site for prefectural workers from Sept. 7.

More municipal governments are being forced to do an about-face on their plans to start inoculating residents from the oldest age groups first.

Koji Wada, a professor of public health at the International University of Health and Welfare, said there is an increasing need for young people to be vaccinated.

"However, each municipality is progressing along on their vaccination drive at a different pace," he said. "Local officials are forced to walk a fine line as they also have to consider the importance of vaccinating many people in their 40s and older who are at a relatively higher risk of developing severe symptoms."