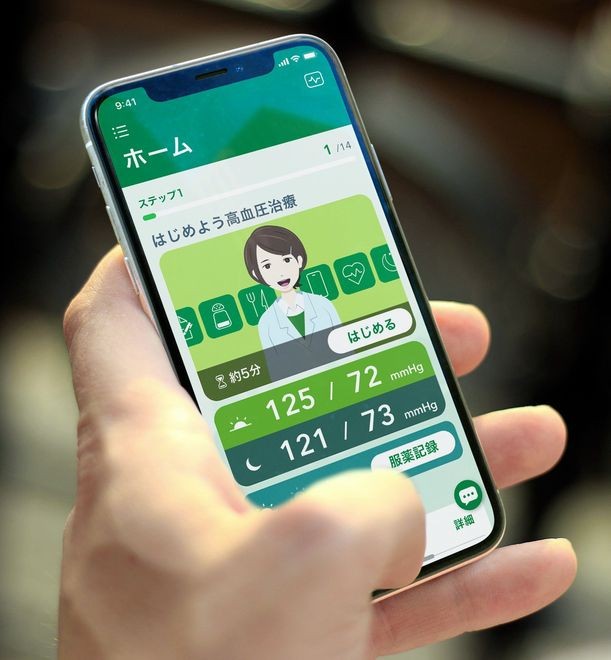 Blood pressure can be reduced through a hypertension therapeutic app that provides dietary advice and other health-monitoring features, a clinical trial has shown.

The app, jointly developed by Jichi Medical University and CureApp Inc., runs on smartphones and other devices.

"Treatment with the app can be a significant option for non-drug treatment," said Kazuomi Kario, a professor of cardiovascular medicine at the university who served as clinical trial coordinator, at a news conference on Sept. 3.

The app provides advice on reducing salt in the diet and other efforts to improve the user's daily habits by entering daily blood pressure readings, content of meals and the amount of exercise.

CureApp, based in Tokyo's Chuo Ward, submitted an application in May requesting the health ministry to approve production and sale of the app as a medical instrument.

CureApp previously developed another app for smoking cessation treatment that was approved in 2020 as the first medical instrument to be covered by insurance.

Others are also making efforts to apply digital technologies in the health care sector.

The clinical trial for the app was conducted at several medical institutions in Japan.

About 390 hypertension patients aged between 20 and 64 who were not taking antihypertensive medication were recruited for the test. The test compared a group of participants who were only given guidance on changing their daily habits with a group who followed the guidance and also used the app.

Twelve weeks later, the systolic blood pressure for the group that used the app had improved by 4.9 mmHg, showing a 2.4 mmHg decrease compared to the other group.

It is thought that the combined use of the guidance and the app had the effect of reducing the risk of stroke, heart failure and other brain and cardiovascular diseases by 10.7 percent, the company said.

The app cannot be used unless it is supplied the "prescription code" prescribed by a doctor because it is a medical instrument.

Because the information collected in the app can be shared with the user's doctor, it is expected that medical experts can make more effective use of their limited time for patient examination.