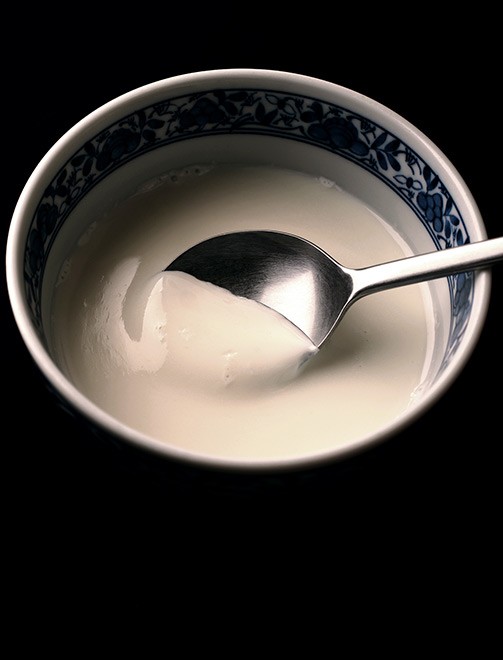 In this intriguing dessert, the milk turns jiggly through the power of an enzyme found in ginger. All it takes are ginger, milk and sugar.

One tip for having it turn out well is maintaining the right temperature. The enzyme in ginger is said to function best at around 60 degrees and will no longer work when the temperature is 70 degrees or above.

When heating the milk, the stove should be turned off just before reaching 70 degrees as the milk’s temperature will dip a little when you pour the milk in a bowl.

“Use a thermometer to measure exactly,” says Katsuhiko Yoshida, who oversaw the recipe’s cooking aspect.

The arranged version offers milk pudding topped with bacon and clams, which tastes somewhat like a cream stew and makes for an interesting side dish.

This week’s recipe, instead of using gelatin or agar, relies on the reaction of an enzyme found in ginger juice, which may lead the pudding to not set properly.

“The quantity of the enzyme and its function differ depending on where the ginger was produced and which part of it is used,” says Midori Kasai, a professor emeritus at Ochanomizu University, who supervised the cooking science aspect of the recipe.

“If the pudding fails to set, try using more ginger or choosing a different ginger.”

That process of trial and error by changing the ingredient or quantity is also a good way to enjoy Gohan Lab. Even if the milk fails to set, you could enjoy it as ginger milk.

* Ingredients and Cooking Utensils (Serves one)

1. Grate ginger, wrap in kitchen paper and squeeze out juice (PHOTO A). There should be about 1 Tbsp juice but since water content of ginger determines the amount of juice, grate more ginger if juice is not enough.

2. Pour milk in small pot and mix in sugar. Place on low heat and warm while checking the temperature with a thermometer. To avoid diminishing the function of enzyme in ginger juice waiting to be mixed, turn off heat just before temperature reaches 70 degrees (PHOTO B).

3. Add ginger juice in bowl and pour warmed milk at once (PHOTO C). Temperature of milk will fall, nearing the temperature at which ginger’s enzyme works best. Leave for 4 to 5 minutes.

Midori Kasai is a professor emeritus at Ochanomizu University and former chairwoman of the Japan Society of Cookery Science.

Ginger milk pudding as a side dish (Serves one)