Warship sunk in 1927 collision found on seabed off Shimane 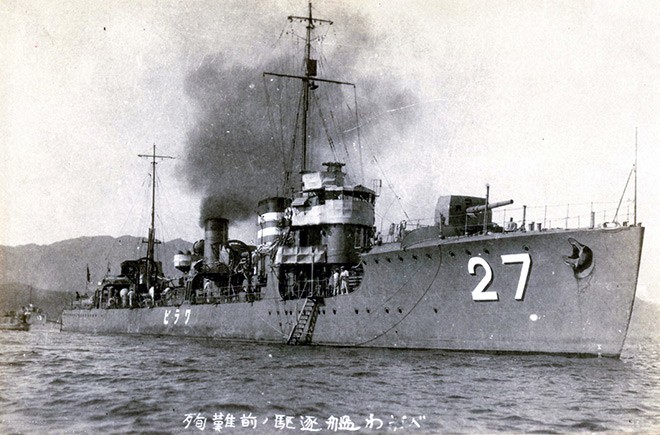 The Imperial Japanese Navy destroyer Warabi, shown in this photo, sank in a collision off Shimane Prefecture in 1927. (Provided by the Yamato Museum)

MATSUE--For more than 90 years, the final resting place of the Imperial Japanese Navy destroyer Warabi was unknown after a collision with a light cruiser during a nighttime drill in the Sea of Japan.

Now, the likely remains of the battleship, whose hull was split into bow and stern sections, have been discovered at two seafloor sites by a local group commemorating the tragedy.

Two pairs of warships collided in succession off Mihonoseki, part of today’s Matsue, capital of Shimane Prefecture, in August 1927 during the exercise under lightless conditions.

The Warabi sank following the collision, while the Ashi destroyer collided with another light cruiser and was seriously damaged. A total of 119 people died.

Some have called the Mihonoseki incident the maritime equivalent to a well-known tragedy during a military drill at Mount Hakkodasan in Aomori Prefecture in 1902. A group of 199 members of an Imperial Japanese Army infantry regiment died during a march in the snow.

Officials of the Mihonoseki incident memorial association said locating the whereabouts of the sunken ship will help pass down the disaster to posterity at a time when association members are aging and fewer people know about the incident.

The association, which has about 70 members, opened a search in May last year.

Local fishermen told association members there is a fishing ground in the area where the Warabi likely sank that goes by the name of “Gunkan” (warship) or “Warabi.”

A search with a multibeam sonar system, which uses sound waves to study the unevenness of the seabed, spotted a massive object on the 97-meter-deep ocean floor off Kotoura, Tottori Prefecture. The site is located 33 kilometers to the northeast of the Mihonoseki Lighthouse, which stands guard at the eastern end of Shimane Peninsula.

In September last year, the association scrutinized the object through an underwater drone and identified it as a ship’s body with a length of 50 meters or so. It enlisted the assistance of other parties, such as a company that employs sounding technology and the Kyushu University Research Center for Coastal Seafloor, which had a track record in underwater surveys.

Members of the expedition team determined that the object was the Warabi’s bow section, partly based on Imperial Japanese Navy records that reported the destroyer’s hull being broken into two parts.

The stern portion was not discovered. The association conducted another survey in July, working in a consortium of six parties, including a company with deep-sea research technology.

The survey located a 36-meter-long section of a ship, likely the Warabi’s stern, on the 185-meter-deep seabed 38 km northeast of the Mihonoseki Lighthouse. The site is located 10 km north of the bow.

The sunken stern was found with the afterdeck facing up.

The characteristic structures, guns and other features matched those the Imperial Japanese Navy documented as belonging to the Warabi.

Superimposing images of the bow and stern on top of each other showed the two sections nearly fitting together. Their lengths added up approximately to 88 meters, the total span of the Warabi. That led association officials to conclude that the two structures are parts of the Warabi’s hull.

The bow and stern likely drifted apart from each other because they had the time to be carried away by tidal currents. Warships are built in such a manner that they slowly sink.

A section of another ship, measuring 20 to 30 meters in length and some 8 meters in width, was also found on the seabed some 100 meters east of the Warabi’s stern during the survey in summer. Association officials said it could be part of the Ashi destroyer.

Keitaro Ohara, 23, a third-year student at Shimane University who has played a leading role in the expedition, said, “The Warabi’s body is an important piece of ‘underwater remains’ that testify to the history of the war. Its discovery is significant.”

Ohara’s father serves as vice president of the Mihonoseki incident memorial association, and he struck up an interest in the tragedy while he was studying local history.

Ohara said he is concerned about possible deterioration of the ship’s body beneath the sea.

Members of the expedition team have been working to create an elaborate 3-D model of the ship’s body on the basis of tens of thousands of images, which they have photographed.

They hope that their modeling work will not only allow them to grasp the state of the ship’s degradation but also prompt the development of technologies for curbing deterioration and help with the preservation of other sunken vessels across the world.

Underwater archaeologist Kotaro Yamafune, 37, said that underwater war remains, such as battleships and fighter planes that sank beneath the waves during World War II, have mostly been left intact, so they can decay and disappear in time.

“The availability of a symbol, like the Atomic Bomb Dome of Hiroshima, makes a world of difference,” said Yamafune, who has taken part in the surveys and the 3-D modeling. “The expedition for the Warabi serves as a model case for passing down an episode of history for posterity.”

Cenotaphs for the Mihonoseki incident exist in Sakaiminato, Tottori Prefecture, and elsewhere. Association officials plan to erect additional memorial monuments, hopefully by next summer, at the two seafloor sites where the Warabi’s sections are resting.

The project faces a mountain of challenges, including how to raise funds and how to anchor the monuments on the ocean floor. But officials said they are determined to pass down accounts of the tragedy and tell lessons on the preciousness of life.

(This article was written by Tadashi Sugiyama and Fumi Yada.)