Survey: Kono backed by 33% of voters in LDP presidential race 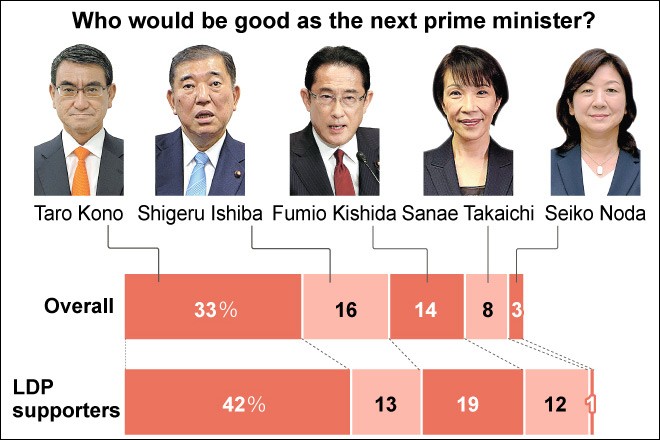 Taro Kono is the preferred choice in the leadership race of the ruling Liberal Democratic Party of 33 percent of voters and 42 percent of party supporters, an Asahi Shimbun survey showed.

The administrative reform minister is well ahead of Shigeru Ishiba, former defense minister and LDP secretary-general, who was picked by 16 percent of voters; Fumio Kishida, former LDP policy chief, at 14 percent; Sanae Takaichi, former communications minister, at 8 percent; and Seiko Noda, executive acting secretary-general of the LDP, at 3 percent, according to the Sept. 11-12 nationwide telephone survey.

Among LDP supporters, Kishida placed second at 19 percent, followed by Ishiba at 13 percent, Takaichi at 12 percent and Noda at 1 percent, the survey showed.

The respondents were asked to choose from five LDP lawmakers who have announced or are considering their candidacy for the LDP’s presidential election to replace Prime Minister Yoshihide Suga.

The winner of the LDP race will automatically become prime minister because of the party’s dominant numbers in the Diet.

Twenty percent of respondents in the survey replied that their preferred candidate was not among the five.

Official campaigning is scheduled to start on Sept. 17, with voting held on Sept. 29.

Kono was also picked by 28 percent of unaffiliated voters. Ishiba came in second, at 17 percent, while 11 percent selected Kishida. Takaichi was cited by 6 percent and Noda by 5 percent.

Asked to choose from among four qualities most needed as the next prime minister, 64 percent picked “ability to get things done,” while 15 percent cited “sincerity.” “Skills to get messages across” was picked by 10 percent and “political beliefs” by 7 percent.

Thirty-eight percent of voters who prioritized the ability to get things done endorsed Kono.

So far, Kono, Kishida and Takaichi have announced their candidacies for the LDP presidential election, pledging to follow the path laid out by the Shinzo Abe and Suga administrations.

But the Asahi survey found that 58 percent of voters feel the new LDP leader should break with that direction, more than double the 28 percent who answered that he or she should stay the course.

The approval rating for the Suga Cabinet came to 30 percent, up from 28 percent in the previous survey taken in August.

The surge in support for the ruling party was in sharp contrast with the main opposition Constitutional Democratic Party of Japan.

The latest survey showed that 5 percent of voters backed the CDP, slipping from 6 percent in the previous survey.

The LDP also expanded its lead over the CDP as the preferred party in the proportional representation segment of the Lower House election if it were held now.

Forty-three percent of respondents picked the LDP, up from 35 percent in the August survey, while 11 percent chose the CDP, down from 15 percent.

Observers say the surge in support for the LDP is largely due to the growing media spotlight on who will enter the leadership race and who will likely win, putting the CDP at a further disadvantage.

It received 575 valid responses, or 55 percent, from 1,042 fixed numbers of households with at least one eligible voter each.

There were 902 valid responses, or 44 percent, from 2,027 mobile phone numbers of eligible voters. Valid responses totaled 1,477.