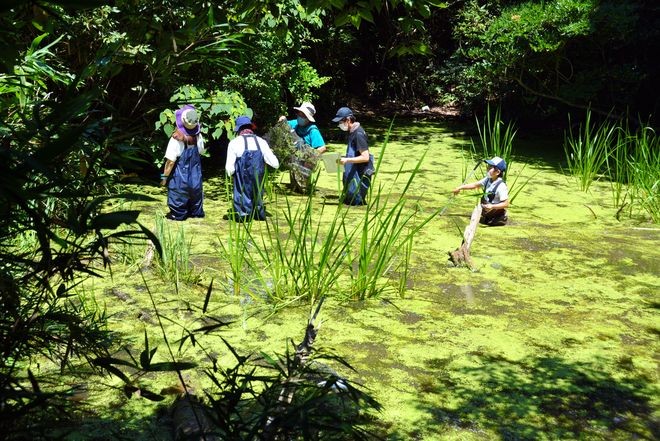 A survey conducted in July in a swamp surrounded by underbrush near the coast here found beetles, backswimmers and other aquatic shield bugs, as well as damselflies and members of the white-tailed skimmer species.

In 2019, a variety of water strider known as “esaki amenbo,” which is designated as a near-threatened species on the Environment Ministry’s Red List, was found for the first time in the prefecture in a phragmites field.

Surveys have also shown surges in biodiversity on farmlands in the area.

“When word spreads that coastal areas and rice paddies in Fukushima (Prefecture) are safe places where many rare creatures live, it should help overcome the negative reputation (about radiation),” Toshimasa Mitamura, a researcher at the Fukushima Agricultural Technology Center, said.

Agricultural products from Fukushima Prefecture are still shunned by some consumers because of misunderstandings about radiation contamination from the triple meltdown at the Fukushima No. 1 nuclear plant in 2011.

In a survey published in February by the Consumer Affairs Agency, 8.1 percent of the about 5,000 respondents said they hesitate to buy agricultural products from Fukushima Prefecture because they are worried about radioactive substances.

In reality, no bags of Fukushima rice have been found exceeding the government-set radiation limit since 2015.

That same year, American bullfrogs, an alien species unseen in the area before the March 2011 Great East Japan Earthquake and tsunami caused the nuclear disaster, were found in Soma.

Although the numbers of backswimmers and ferocious water bugs had decreased, their numbers partially recovered thanks to continued efforts to eradicate the American bullfrogs.

Surveys and pest control efforts provide a forum for local children to learn about biodiversity. Junior and senior high school students and other volunteers also joined the July survey.

“I’m happy I found insects that I had never seen before,” said Hiroki Wake, 9, a fourth-grader living in Soma who has participated in the survey since he was a third-grader. “I love aquatic bugs. I want to continue joining (the effort).”

He said his best “friend” he had captured so far was a diving beetle, an endangered species on the Red List.

In a nearby swamp in the city’s Isobe-Osu district, the prefectural government set up a “conservation area for rare species” after the 2011 earthquake. The area includes a “conservation zone” designated by the Forestry Agency.

When Takahide Kurosawa, a Fukushima University professor of plant taxonomy, and others stepped into the swamp area, “ashihara-gani” crabs moved around all at once.

“Hamasaji” sea lavenders, a near-threatened plant species on the Red List, were growing thickly, while a school of “medaka” rice fish were seen swimming in the water.

Kurosawa and others found 10 plant species that are endangered in Fukushima Prefecture and require protection in the Forestry Agency-designated conservation zone, including hamasaji, a sedge variety called “ookugu” and herbaceous seepweed.

Twelve areas of wetlands and mudflats covering about 27 hectares were placed under protection following their creation in the aftermath of the earthquake and tsunami. Nine of those areas covering about 18 hectares are in Fukushima Prefecture, according to Kurosawa.

“Prefectural and central government authorities thought about conservation in a flexible manner, and the important wetlands still remain as a result,” he said.

Farmlands are also home to many creatures.

Members of the Fukushima Agricultural Technology Center and other organizations conducted a series of surveys between 2018 and 2020 in 44 rice paddies in eight municipalities, including Soma, the coastal town of Namie and the mountainous village of Iitate.

Their aim was to study differences in biota caused by decontamination work and the suspension of farming.

They also evaluated biodiversity based on spiders, dragonflies, frogs, aquatic beetles and other creatures.

The studies found that 20 to 60 percent of the rice paddies had high biodiversity in 2018, while the figures increased to between 60 and 80 percent in 2020.

Twenty-eight species of aquatic insects were found during the three-year period. Water scavenger beetles, Tokyo daruma pond frogs and other critters whose numbers are dwindling were also discovered.

It was also learned that biodiversity increased in the year following the resumption of farming.

Although farming was discontinued, it is possible that many aquatic bugs return to the area and increase biodiversity once farmwork resumes, according to the agricultural technology center.

Many species of aquatic insects living in rice paddies are decreasing in number because they are sensitive to pesticides and other environmental stressors.