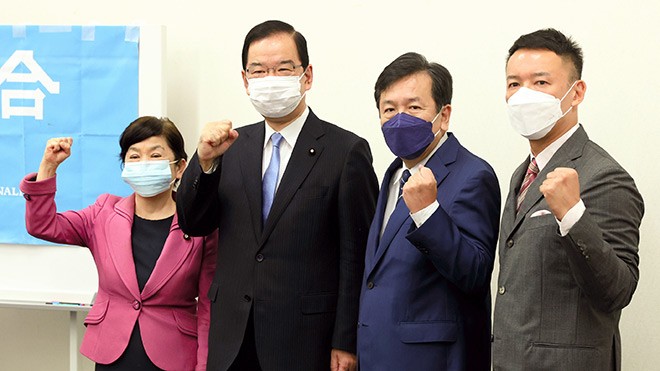 From left: Mizuho Fukushima of the Social Democratic Party, Kazuo Shii of the Japanese Communist Party, Yukio Edano of the Constitutional Democratic Party of Japan and Taro Yamamoto of Reiwa Shinsengumi on Sept. 8 (Koichi Ueda)

While the ruling Liberal Democratic Party’s presidential election, which will effectively choose the nation’s new leader, is drawing public attention, opposition parties are gearing up for the Lower House election.

Four opposition parties joining hands need to offer a viable alternative to the coalition of the LDP and its junior partner, Komeito, to make their alliance work.

The common policy platform they have adopted has six planks including restoration of politics based on the Constitution, enhancing measures to combat the novel coronavirus pandemic based on science and realizing a fair and transparent administration that rejects any abuse of power by politicians.

It is designed to undo the negative legacies of the past two administrations of former Prime Minister Shinzo Abe and his successor, Yoshihide Suga.

The civil alliance was formed at the end of 2015 as a byproduct of protest rallies against new national security legislation held in front of the Diet buildings.

The group has been acting as a go-between to help opposition parties team up for national elections, starting with the Upper House poll in 2016. The group’s efforts have produced some notable results.

The relevance of the opposition alliance will be crucially tested by the upcoming Lower House election, an opportunity for voters to deliver their verdict on the achievements and failures during Abe’s seven years and eight months in office and Suga’s one-year tenure.

The opposition camp, however, is far from monolithic, with the Democratic Party for the People not joining the four-party alliance because of its aversion to any cooperation with the Japanese Communist Party.

Some of the planks on the shared policy platform are vague without a clear blueprint or road map, including promises to cut the consumption tax rate and phase out nuclear power generation.

The four parties urgently need to agree to field common candidates in single-seat constituencies where there is more than one potential opposition contender and also coordinate their plans to tackle the pandemic and other key policy issues.

The CDP, the largest opposition party, has to take on the onus of playing a leading role in these efforts.

Prior to signing the policy pact, the CDP unveiled seven policy decisions it will make during the first Cabinet meeting if it seizes power.

The party’s first campaign promises for the Lower House poll include formulating a supplementary budget worth at least 30 trillion yen ($272.55 billion) to deal with the COVID-19 crisis and retracting Suga’s contentious decision to reject six of the nominees to the Science Council of Japan.

The CDP also vowed to set up a task force to get to the bottom of three scandals that plagued the Abe and Suga administrations.

Two of these involved Moritomo Gakuen and Kake Educational Institution, school operators linked directly and indirectly to Abe, and the last one is about payments for Tokyo hotel banquets to entertain voters from Abe’s constituency, which were held on the eves of annual tax-funded cherry blossom viewing parties hosted by Abe.

On Sept. 13, the CDP announced the second set of campaign promises, including an early enactment of legislation to allow married couples to use separate surnames and instituting a law promoting equality for LGBT people.

The five promises also include a review of the Immigration Control and Refugee Recognition Law. They are intended as policies to build a society that embraces greater diversity.

The CDP is apparently focusing on areas where its policies clearly differ from those of the LDP. However, the party should swiftly present its policy agenda for the next four years in its entirety if it is serious about wresting power from the ruling coalition.

The CDP should also make clear its future relationship with the JCP, with which it disagrees over such key issues as Japan’s security treaty with the United States and the role of the Self-Defense Forces.

Japanese voters need to know whether the CDP envisions a full-fledged coalition with the JCP beyond the electoral cooperation.

The opposition camp found that a strategy focused on attracting voters critical of or discontent with the Suga administration by capitalizing on its policy mistakes is unworkable after the unpopular prime minister decided to step down shortly before the Lower House election.

Instead of trying to recalibrate its strategy in response to moves within the ruling camp, the CDP and its allies should focus on developing a policy agenda worthy of the trust of the voting public.