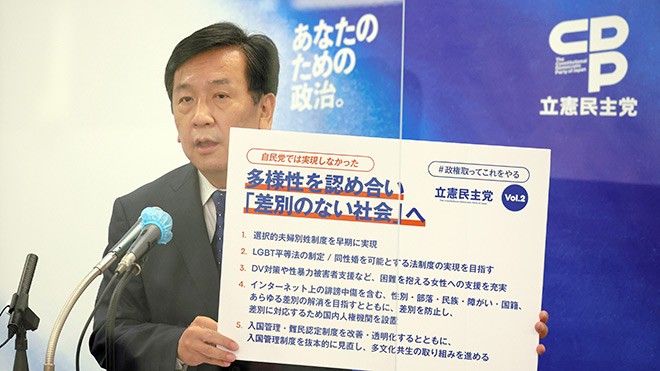 Yukio Edano, head of the main opposition Constitutional Democratic Party of Japan, announces a second package of policy planks for the next Lower House election at a Sept. 13 news conference. (Koichi Ueda)

Seeking political relevance, the main opposition party released a second package of campaign planks focused on diversity and human rights that it says will never be implemented with the Liberal Democratic Party in power.

“With majority opinion in the LDP strongly opposed, it will never be able to push through these policies regardless of who becomes the next party leader,” Edano said.

The opposition party is not only preparing for the Lower House election that must be held this autumn, but it also wants to turn some of the media focus away from the LDP presidential race, the winner of which will replace Yoshihide Suga as prime minister.

The CDP’s latest move appears aimed at sharply differentiating it from the LDP on a number of high-profile issues.

To achieve multicultural diversity, the CDP said it would work to comprehensively revise the immigration control structure.

Regarding protecting human rights, Edano said the party would strengthen support for women who are victims of domestic violence or sex crimes.

The party would also seek to eliminate discrimination in all forms, including hate speech over the internet as well as discrimination based on gender, place of birth, ethnic background, disability and citizenship.

Edano said the only way to implement policies that respect diversity and human rights was to change the government.

The CDP had criticized the LDP in the last Diet session for failing to follow through on such issues as allowing married couples to choose separate surnames and protecting sexual minorities from discrimination.

A multipartisan agreement had been reached to submit a bill to promote an “understanding of sexual minorities” in the last Diet session, but it never reached the Diet floor for a vote because the LDP General Council would not give its approval.

Edano said the death in March of a Sri Lankan woman who was detained by immigration authorities shed light on the backwardness of Japan’s immigration and refugee recognition policy.

He called for legal changes to eliminate what he called an “extremely embarrassing situation.”

Despite Suga’s resignation announced in early September and criticism over his government’s response to the COVID-19 pandemic, the CDP has failed to capitalize.

The first package of policy planks released by the CDP on Sept. 7 included items the party would implement immediately if it took power, including appointing six scholars who were denied membership on the Science Council of Japan last year by Suga.

The opposition party plans to release other policy planks regarding economics, foreign affairs and gender issues in the near future.

(This article was written by Tsubasa Yokoyama and Maho Yoshikawa.)