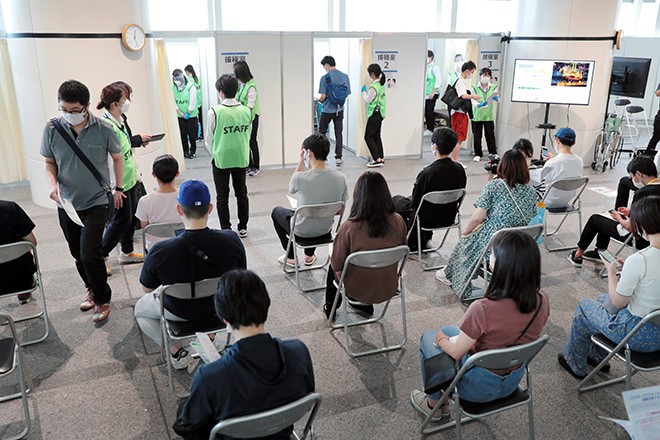 A COVID-19 vaccination center for young people in Nagoya on Sept. 11 (Masaki Yamamoto)

More than half of Japan’s population has been fully vaccinated against the novel coronavirus, but the highly contagious Delta variant is complicating matters.

According to the website of the prime minister’s office updated on Sept. 13, 50.9 percent of the population had received two jabs as of Sept. 12, while 63.0 percent had received the first doses.

Vaccine doses distributed to municipal governments fell in short supply in June and July, forcing some companies and universities to suspend their vaccination programs.

However, Japan has managed to keep a pace of providing 1 million shots per day.

“If the current pace of vaccinations continues smoothly, the rate of fully vaccinated people will top 60 percent at the end of this month,” Yasutoshi Nishimura, a Cabinet minister who is also in charge of measures against COVID-19, said on an NHK television news program on Sept. 12.

In European countries, which started vaccination rollouts earlier than Japan, the number of fully vaccinated people appears to have hit a ceiling of 50 to 60 percent of their populations.

Some of those countries, as well as the United States, are facing heightened anti-vaccine movements, and many of their young people are unwilling to take the shots or are indifferent to the health issue.

According to a report of the Our World in Data research group led by University of Oxford researchers, the rates of fully vaccinated people were about 64 percent in Britain, about 62 percent in France, and about 53 percent in the United States as of Sept. 11.

The Japanese government set a goal of completing the second-dose process for all people who want to be inoculated in October to early November.

Measures have been taken to promote vaccinations among younger generations to battle the virus and prevent the inoculation pace from slowing down.

However, there are concerns about breakthrough infections of fully vaccinated people, particularly with the spread of the Delta variant, which is considered more resistant to the current vaccines.

The government had hoped to achieve herd immunity through the vaccination program. But the Delta variant has pushed back that plan.

“Even if all the people who want to be vaccinated receive their shots, it will still be difficult to reach herd immunity,” the government expert panel on responses to the novel coronavirus said.

The health ministry is considering whether booster shots will be necessary.

(This article was written by Masatoshi Toda and Kohei Morioka.)