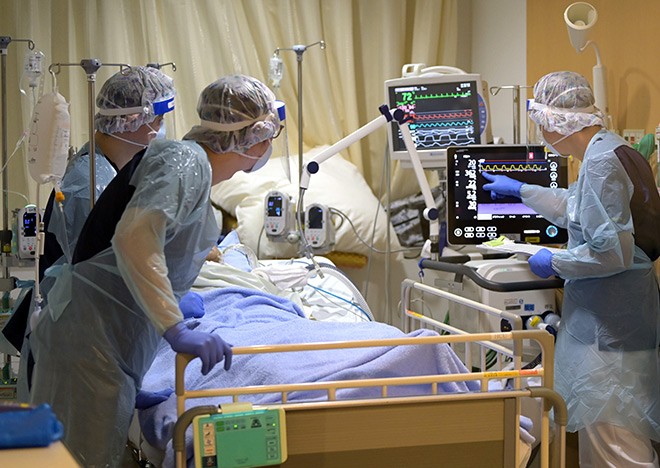 Doctor Kazuaki Fukushima, left in the back, cares for a gravely ill COVID-19 patient by checking a ventilator screen and consulting with Yu Onodera, right, an intensive care specialist, at Komagome Hospital in Tokyo on Sept. 8. (Ryo Kato)

COVID-19 case numbers are steadily declining in Tokyo and other major urban centers this month, suggesting the fifth and largest wave of infections yet is finally ebbing.

But severe cases requiring the use of a ventilator or ECMO heart-lung bypass machine have not declined. Those tend to manifest sometime after a spike in new cases.

Doctors specializing in intensive care have proven some of the most valuable resources brought to the capital from around the nation to help Tokyo hospitals cope with a surge in gravely ill patients from the fifth wave of infections.

Yu Onodera, 38, a specialist at Yamagata University, is one of them. On the night of Sept. 8, he monitored the condition of a patient on a ventilator at the Tokyo Metropolitan Cancer and Infectious Diseases Center Komagome Hospital in Bunkyo Ward.

The patient, who is in his 60s, received oxygen after he was intubated. He was barely conscious because he was given a sedative to ease his pain.

Onodera tried to determine how much pain the patient was experiencing, and whether it came from the intubation or from respiratory failure.

After checking the patient’s blood oxygen saturation level, he instructed workers to lower the level of oxygen that the patient was receiving.

“Gravely ill patients do not recover steadily, often repeating the process of getting better and then worsening again,” he said. “The most difficult decision that intensive care specialists have to make is when patients should be weaned off ventilator support.”

Komagome Hospital, with 815 beds, is well-known as a highly specialized institution that treats cancer patients. But it does not have among its staff intensive care specialists well-versed in using a ventilator.

In August, the number of patients admitted to the hospital topped 150, as the highly contagious Delta variant fueled new cases in the Tokyo metropolitan area. In the middle of August, hospital officials moved to accept severely ill patients that other hospitals could not handle.

According to the metropolitan government, about 50 cases required the use of a ventilator or ECMO in the capital in early July. Those cases jumped to about 300 by the end of August.

Komagome Hospital has admitted severely ill patients from time to time. But the most it had treated simultaneously was four.

With a resurgence of caseloads, the hospital rushed to deal with 12 severe cases--the same as the number of ventilators available there--and marshalled doctors from other departments of the hospital.

It also cut back on the number of patients with other diseases it was treating by 40 percent and delayed scheduled surgeries to help ride out the situation that one doctor described as “akin to a natural disaster.”

The Japan ECMO Network, a nonprofit comprised of intensive care specialists, moved to help medical staff in Tokyo by enlisting help from specialists in other prefectures, including Hokkaido, Yamagata and Shimane, where the spread of the virus and the condition of health care systems were not as dire as in the capital.

Those specialists, including Onodera, were sent to Tokyo hospitals from Aug. 23 that were not well-versed at caring for COVID-19 patients with a ventilator.

Experts say it takes a great deal of caution when applying a ventilator to a COVID-19 patient who has developed severe pneumonia.

Health care workers need to fine-tune the device based on the condition of an individual patient’s lungs so as not to further damage their organs.

“Our target was to save as many lives as possible,” said Keiki Shimizu, a senior member of the Japan ECMO Network and head of the Emergency and Critical Care Center at the Tokyo Metropolitan Tama Medical Center, “as many hospitals did not have expertise and experience in caring for gravely ill patients, as they had largely treated those with moderate symptoms.”

When his special assignment ended on Sept. 13, Onodera said working at Komagome Hospital during this latest phase of the pandemic was unlike anything he experienced in his life.

“I have never cared for this many patients with as many cases of serious respiratory failure at one time,” he said. “It was tough indeed.”

Three to four specialists were deployed to Komagome Hospital every day until Sept. 13.

Now doctors at the hospital say they have a better understanding of how to more effectively operate a ventilator in caring for serious COVID-19 cases, after specialists showed them how during study meetings and individually as they were providing intensive care.