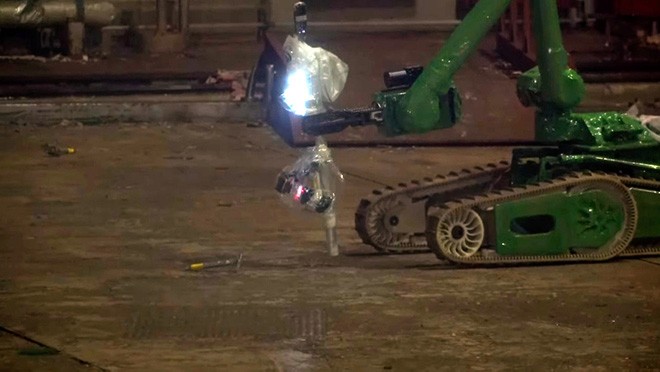 A remotely controlled robot inserts a dosimeter into a hole created to measure radiation levels beneath the uppermost lid of the No. 2 reactor’s containment vessel in a study on Sept. 9. (Provided by the Nuclear Regulation Authority)

The operator of the crippled Fukushima No. 1 nuclear plant could be forced to reconsider the plant's decommissioning process after lethal radiation levels equivalent to those of melted nuclear fuel were detected near one of the lids covering a reactor.

The Nuclear Regulation Authority said Sept. 14 that a radiation reading near the surface of the lid of the No. 2 reactor’s containment vessel was 1.2 sieverts per hour, higher than the level previously assumed.

The discovery came on Sept. 9 during a study by the NRA and Tokyo Electric Power Co., the operator of the plant.

TEPCO plans to insert a robotic arm into the No. 2 reactor’s containment vessel from its side in a trial planned for the second half of 2022 to retrieve pieces of melted nuclear fuel.

“We will consider what we can do during the trial on the basis of the detection of the concentration of contamination” in the upper area of the containment vessel, a TEPCO official said.

The round concrete lid, called the shield plug, is 12 meters in diameter and about 60 centimeters thick.

The shield plug consists of three lids placed on top of each other to block extremely high radiation emanating from the reactor core.

When operators work on the decommissioning, the shield plug will be removed to allow for the entry into the containment vessel.

The NRA said a huge amount of radioactive cesium that was released during the meltdown of the No. 2 reactor in March 2011 remained between the uppermost lid and middle lid.

In the Sept. 9 study, workers bored two holes measuring 7 cm deep each on the surface of the uppermost lid to measure radiation doses there by deploying remotely controlled robots.

One radiation reading was 1.2 sieverts per hour at a location 4 cm down from the surface in a hole near the center of the lid.

Prior to the study, the NRA estimated that the dose from a contamination source that existed beneath the lid was more than 10 sieverts per hour, a level lethal to humans if exposed to it for about an hour.

But the finding suggested that the actual dose would likely be dozens of sieverts per hour, thus far more dangerous.

While it is expected to be a huge challenge to dismantle the lids, TEPCO has yet to decide what to do with them during the decades-long cleanup work.

The NRA also mentioned the possibility that radioactive cesium is also concentrated between the middle lid and the lowermost lid.

But there is no way at the moment to confirm whether that is the case, according to NRA officials.