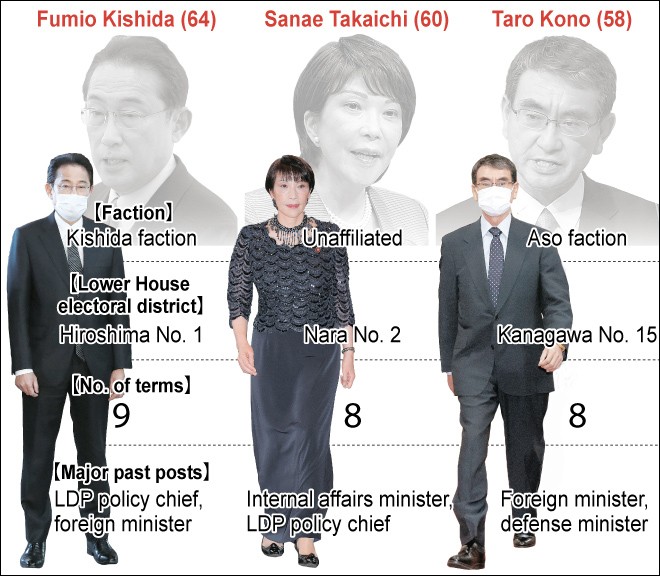 Political heavyweight Shigeru Ishiba’s declared support for Taro Kono in the ruling Liberal Democratic Party’s presidential election could end up hurting his chances of winning the poll and becoming Japan’s next prime minister.

Although a recent Asahi Shimbun survey shows that Kono, the state minister in charge of administrative reform, is the public’s preferred choice to win the LDP election later this month, party factions have traditionally wielded the most influence on who should lead the party.

And many influential politicians in these factions have not forgotten Ishiba’s past criticism and may punish Kono as a result.

Ishiba, a former LDP secretary-general, formally announced on Sept. 15 that he would not run in the party’s election. According to sources, the final straw for Ishiba came at a meeting of his faction on Sept. 7 when only two members said he should run for a fifth time for LDP president.

Kono on Sept. 13 met with Ishiba and asked for his cooperation if he won the election.

After reports emerged that Ishiba was throwing his support behind Kono, the two largest LDP factions decided to hedge their bets about backing the apparent early front-runner.

Ishiba openly criticized Shinzo Abe when he was prime minister as well as the Finance Ministry’s handling of documents related to the questionable sale of state-owned land to the Moritomo Gakuen educational institution.

The former head of Moritomo had often boasted about his close ties to Abe’s wife, Akie.

Abe is a member of this faction, and the support for Takaichi is largely due to her close ties to him and their similar ideological views.

Although Kono belongs to the Aso faction, veteran members have long been wary about whether Kono was level-headed enough to lead the nation.

The support shown by Ishiba may not help Kono with the Aso faction because Ishiba was also critical of Aso when he served as prime minister.

“When Ishiba comes closer, others move away,” a member of the Aso faction said.

Although no formal decision has been made by the Aso faction, it appears likely it will split its support between Kono and Kishida.

But some faction members also said they would back Takaichi in the election.

The lack of unity among the LDP factions is in stark contrast to last year, when the five major ones quickly threw their support behind Yoshihide Suga, which led to his landslide win and subsequent rise to prime minister.

The faction led by LDP Secretary-General Toshihiro Nikai was the first last year to support Suga, but it has yet to make a decision about what to do this time around.

Younger Nikai faction members held a meeting on Sept. 13 and shared their view about supporting Kono. One participant said there would not likely be an organized effort led by Nikai to endorse Kono. Instead, the faction could take a more informal drive to drum up support.