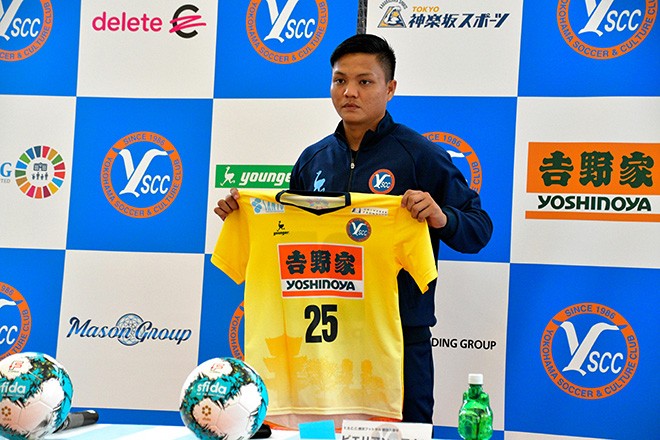 YOKOHAMA--Myanmar refugee Pyae Lyan Aung has found a new home with the YSCC Yokohama futsal team in the F.League and he intends to repay its loyalty.

The former goalie for the Myanmar national soccer team attended a news conference at a futsal court here on Sept. 14 and said that he “wants a wide range of people to learn about Myanmar” through his performance.

“I would like to do my best for my team that supports me like a family,” he said. “My country faces a harsh reality. I hope that we can get help and support from Japan and other nations.”

Pyae Lyan Aung refused to return to his homeland after publicly protesting the military's seizure of power in Myanmar.

He came to Japan with the Myanmar national team for a May 28 World Cup qualifying round match against the Japanese national team. During the national anthem, he made a three-finger salute, a gesture of resistance against the military coup and oppression in his home country.

He refused to board the plane to return to Myanmar, fearing being persecuted there. He applied for refugee status on June 22, which was granted in August.

In late July, he became a trainee on the YSCC Yokohama team and started to practice in futsal for the first time, which is played on a smaller field and with fewer players on each side compared to soccer. He is the first refugee player in the F.League.