Descendants of old foes pray for victims of 1571 temple massacre 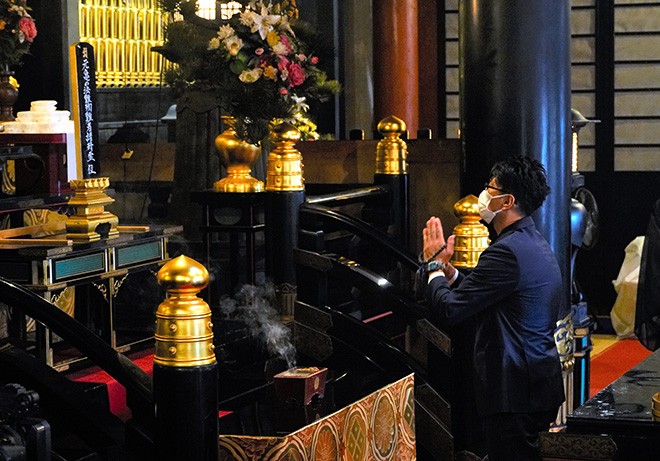 Shigekazu Oda, a descendant of the 16th-century warlord Oda Nobunaga, offers a prayer to victims killed in the Siege of Mount Hiei in 1571 at Enryakuji temple in Otsu on Sept. 12. (Jiro Tsutsui)

OTSU--Four hundred and fifty years after thousands of Buddhist monks and citizens were killed in a historic massacre, old foes came together to make a fresh start.

Their modern-day relations put enmity under the bridge to mark the occasion.

A descendant of the famed warlord Oda Nobunaga (1534-1582) attended a memorial service held at Enryakuji temple on Mount Hiei on Sept. 12, the 450th anniversary of the atrocity, to commemorate the victims.

Nobunaga had set the entire mountain ablaze to kill the monks and others living there.

A descendant of Akechi Mitsuhide (1528-1582), a general who served under Nobunaga in the attack, also attended the ceremony.

It marks the first time that Shigekazu Oda, 43 and Kenzaburo Akechi, 74, were present at the event.

The renowned temple extended an invitation to the men, who both live in Tokyo, to attend this year.

Leaders of the temple decided to act on the teachings of the prominent monk Saicho, the temple’s founder, as this year marked the 1,200th year since Saicho’s death.

One of the teachings is: “If you reward a grudge with virtue, the grudge will instantly cease to exist.”

At an online symposium after the memorial, Jakuho Mizuo, a top monk at the temple, expressed hope that this year’s ceremony will open a new era in the temple’s relations with those descendants.

Oda recalled at first being “in disbelief” when he was invited to the ceremony, given the enormity of what Nobunaga committed on Sept. 12, 1571.

“During the sermon, I felt like Nobunaga was seated next to me, and I was grateful for being given this opportunity,” Oda said.

“Mitsuhide must have been deeply moved,” he said. “Attending the commemorative event became the opening for a new era for descendants of both the Oda and Akechi families.”

The men also paid a tribute to the dead when they visited a memorial built about 30 years ago to dedicate to them.

Warrior monks at Enryakuji temple, of the Tendai sect of Buddhism, long wielded considerable sway over politics in Kyoto.

Nobunaga did not like that when he was consolidating power in many parts of Japan. He was outraged when the temple sheltered enemy warlords in Mount Hiei. He seized the mountain and burned down the temple and many structures, killing the monks and people who lived there.

The temple was later rebuilt with contributions from other warlords.