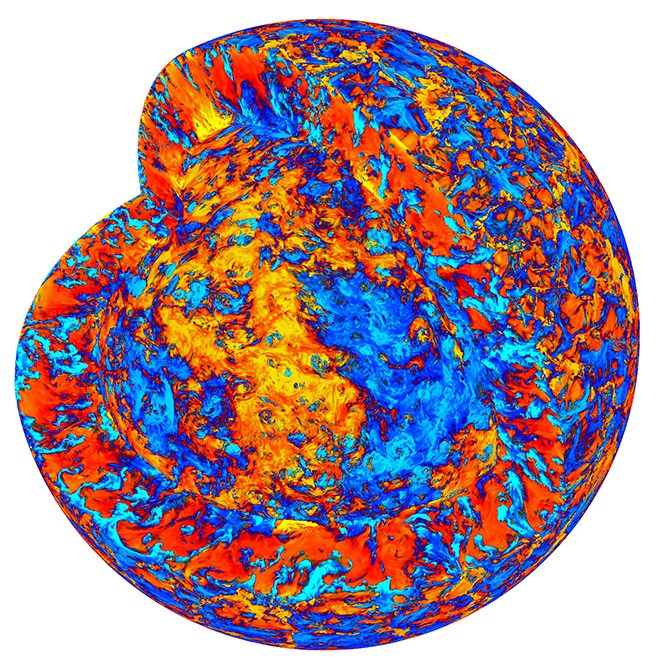 The Fugaku supercomputer shows how heat migrates inside the sun, with orange and blue colors representing hot and cold areas respectively. (Provided by Chiba University)

In a world first, Japanese researchers used the Fugaku supercomputer to reproduce imbalances in the sun’s rotation, a phenomenon that has puzzled astronomers for centuries.

The scientists from Chiba University and Nagoya University simulated the inner workings of the ball of gas in an effort to determine why different areas rotate at different speeds.

All areas on Earth complete one spin in 24 hours.

But it takes about 25 days for zones near the sun’s equator to finish one rotation and about 30 days for those near the north and south poles.

The phenomenon, known as solar differential rotation, was first observed around 1630, according to Chiba University. But there is still no definitive explanation for why this happens.

Using around 5.4 billion points inside the sun, Fugaku calculated how energy from nuclear fusion inside the star is transferred to the surface by convection currents.

The project simulated thermal migration and magnetic field changes based on observation data on the density, pressure and temperatures of the sun.

The high-definition simulation successfully reproduced the equator rotating faster than the north and south poles, the scientists said.

Fugaku’s predecessor, the K supercomputer, could do calculations using only around 100 million points, and it was unable to accurately reproduce the sun’s complicated internal workings.

That experiment wrongly had the equator turning at a slower pace than the poles.

The Fugaku supercomputer could help researchers shed light on another mystery.

The difference in rotation speeds is said to play a key role in the emergence every 11 years of more sunspots and increased solar activity.

“We will also work on figuring out the mechanism of the 11-year cycle--the biggest mystery in solar physics,” said Hideyuki Hotta, an associate professor of physics at Chiba University.