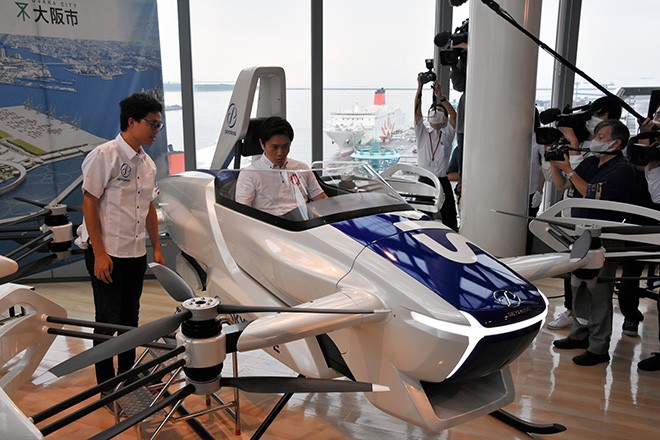 Osaka Governor Hirofumi Yoshimura sits in a prototype of a flying car in Osaka’s Suminoe Ward on Sept. 14. (Itsuki Soeda)

OSAKA--Flying cars are one step closer to ferrying attendees of the 2025 Osaka Kansai Expo around the exhibition halls as a means of transportation, fulfilling the vision of local officials here.

The city government of Osaka, together with the Osaka prefectural government, on Sept. 14 signed a partnership agreement with SkyDrive Inc., a Tokyo-based entrepreneurial venture that develops drones for logistics.

“Taking on a new challenge is one of Osaka’s strengths,” Yoshimura said. “The image of it flying in the sky above resembles a sci-fi movie, and I want to make it happen.”

SkyDrive launched a project to develop a flying vehicle in 2018 and has conducted demonstration experiments and analyses as well as manned flying experiments.

Its latest prototype is a single-seated vehicle 2 meters high and 4 meters in width and length.

The flying vehicle is equipped with eight electric propellers and can fly at a maximum speed of 40 to 50 kph for 5 to 10 minutes at a time.

Before such flying cars are put to work at the Expo, legislation still has to be passed allowing their use, city officials said.