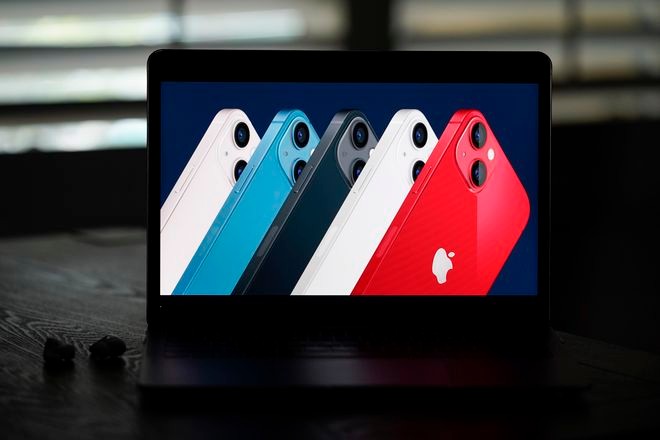 Seen on the screen of a device in La Habra, California, new iPhone 13 smartphones are introduced during a virtual event held to announce new Apple products on Sept. 14, 2021. (AP Photo)

In a postwar black market with rows of stalls, a thug yells menacingly at a peddler to cough up protection money.

I must have seen a scene like this many times in TV dramas, and I always assumed yakuza involvement.

However, many black markets back then were apparently run by associations of street vendors, not by organized crime syndicates.

The associations, which controlled various street fairs, transformed Tokyo's war-ravaged ruins into thriving markets, according to "Tokyo no Yami-ichi" (Black markets of Tokyo), by Makoto Matsudaira (1930-2017).

They cleared the rubble, let hawkers set up stalls and patrolled the sites daily to collect "rent." Their business was based on illegal occupation of land.

Something akin to protection money exists in today's online business world, too.

Diverse business operators are involved in the sale of music and e-books for enjoyment on Apple Inc.'s iPhone, and the U.S. technology giant is said to pocket up to 30 percent in commissions.

Referred to as the "Apple tax," the amount has come under criticism as being too steep, putting pressure on Apple to review it.

Having so far forbidden its sales agencies to direct customers to payment sites other than its own, Apple recently announced it is lifting the ban on certain items from next year.

Once the hefty "Apple tax" is out of the way, consumers should be able to pay less for their purchases.

Apple's compromise owes to the Japan Fair Trade Commission's investigation into the matter on suspicion of antitrust violation. The FTC's "coup" will likely benefit the world.

There was a time when antitrust violation was entirely a domestic issue. But the times have definitely changed.

With the establishment of its new Digital Agency, the government is accelerating the nation's belated digitalization.

But it is also an important task of the government to ensure that online business remains aboveboard.