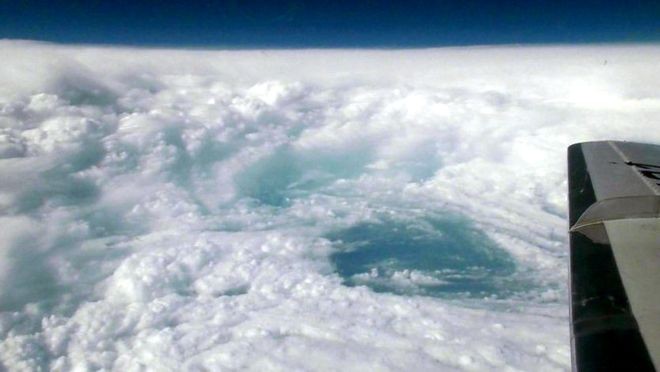 The eye of Typhoon No. 21 of 2017 (Lan) is seen from aboard an aircraft that is approaching it to take measurements in its interior. (Provided by Kazuhisa Tsuboki)

Sapping the strength of a powerful typhoon or harnessing its energy may soon no longer be the plot of a science fiction novel or a Hollywood disaster movie.

Scientists have set about finding ways to control typhoons, which are growing more and more violent under global warming, by the target year of 2050.

They hope to drain the tropical storms of their immense power and mitigate the damage they cause.

Some meteorologists in the project are even dreaming of using typhoons to generate electric power, as their energy is believed to be comparable to a month’s worth of power consumption across the entire globe.

The enterprise has been named “Typhoonshot” in a play on “moonshot,” a venture that is difficult to achieve but promises extremely high returns, such as lunar exploration. The project was set up last year by entities including universities and a manufacturer.

“Japan has always been at the mercy of typhoons, but it would no longer be a pipe dream to sap their strength and turn their energy into useful resources if only we could rally new technologies and research findings,” said Hironori Fudeyasu, a professor of meteorology with Yokohama National University, who leads the Typhoonshot project team.

The Northwest Pacific basin, including the waters around Japan, have high seawater temperatures, which make it a part of the world where typhoons are the most often generated and tend to grow powerfully.

Typhoon No. 19 of 2019, known as Hagibis internationally, claimed more than 100 lives, mostly in eastern Japan including Fukushima Prefecture.

Analysis by the Meteorological Research Institute of the Japan Meteorological Agency (JMA) and another institution showed that Typhoon No. 19 dumped about 10 percent more rain on the Kanto-Koshin region than if there had not been the rise in air and seawater temperatures that occurred over the past four decades.

Attempts at artificially controlling typhoons are nothing new.

The United States repeatedly conducted experiments, until sometime around 1970, on dropping silver iodide into hurricanes in the hopes that sprinkling the chemical substance, which serves as seeds for rain, would modify the shape of the hurricanes and weaken them.

Despite reports saying the seeding reduced wind speeds of hurricanes by 10 to 30 percent, it could not be ruled out that they weakened of their own accord, and the research ended up losing steam.

Fudeyasu said he believes the time is ripe to try again after half a century.

One of the factors he cited is the advances in supercomputer simulation technologies.

The precision of typhoon path forecasting has increased dramatically, allowing the effects of human intervention to be evaluated closely. It has also become easier to simulate the extent of damage mitigation expected from a given reduction in winds and rain.

The scientists on the project team are floating the idea of dropping large amounts of ice into the eye of a typhoon from an aircraft as a cooling measure.

A typhoon gains power from the heat released when water vapor supplied from a warm ocean condenses into a cloud. Cooling its temperature is therefore expected to weaken its strength.

A simulation with Typhoon No. 15 of 2019 (Faxai), which caused wind damage to Chiba Prefecture and other areas, showed a similar measure would have lessened wind speeds by 3.6 to 10.8 kph, resulting in about 30 percent fewer buildings damaged by strong winds.

The measure, however, would require enormous volumes of ice, so the use of more effective substitutes, such as dry ice, should be considered, Fudeyasu said.

Apart from simulations, measurements of the effects would also be invaluable.

A group of researchers from Nagoya University and other institutions are working on a study that has few parallels in the world: using an aircraft to fly into a typhoon and take measurements inside its eye.

They entered the eye of Typhoon No. 21 of 2017 (Lan) two days prior and the day before it made landfall in Japan and found the actual air pressure there was more than 10 hectopascals lower than a JMA estimate based on satellite images and other information.

“Direct measurements are finally disclosing what typhoons are really like,” said Kazuhisa Tsuboki, a Nagoya University professor of meteorology, who heads the group. “While we still face a mountain of challenges, we will pursue the goal of artificially controlling typhoons, which is a dream of researchers like myself.”

The Typhoonshot project also aims to find ways to harness part of the vast energy of typhoons. The project contains a plan for developing an unmanned sailboat that is designed to follow a typhoon automatically by using its strong winds to generate electricity from the rotation of undersea screws. The power that is generated would be sent ashore.

Artificial control of a typhoon, however, could increase its strength locally on the contrary or cause damage to areas that would not have been affected had it not been for the human intervention.

“We will pay particular attention to side effects as we try our hands at sapping the strength of typhoons," Fudeyasu said, adding, "At least we want to offset the increase in their power due to global warming.”