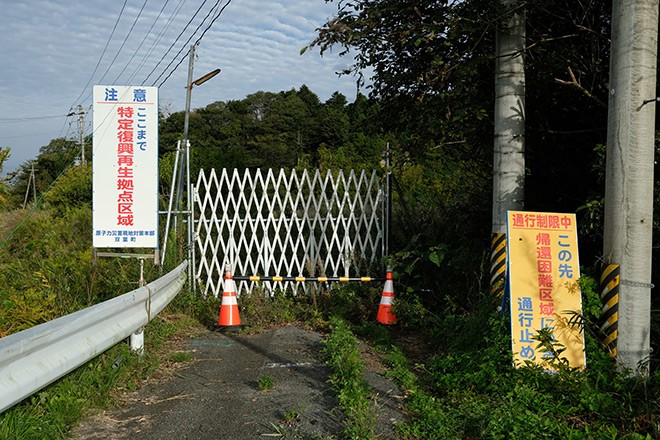 Access is restricted to the "difficult-to-return zone" in Futaba, Fukushima Prefecture. (Sayuri Ide)

More than a decade after the Fukushima No. 1 nuclear power plant accident, there remains more than 30,000 hectares of land where the evacuation order is still in place and is not expected to be lifted any time soon.

The government recently announced a plan to rebuild ravaged communities in these areas near the crippled plant with high levels of radiation, known as “kitaku konnan kuiki” (difficult-to-return zone).

Under the plan, the government will decontaminate the land and houses of local residents who want to return to their homes so that the order can be lifted by the end of the 2020s.

Initially, the evacuation order covered more than 110,000 hectares. The measure was lifted for some 80,000 hectares by March last year.

In 2017 and 2018, the government thrashed out a plan to designate some 2,700 hectares of land in six municipalities within the zone as reconstruction priority areas eligible for preferential policy support to help improve the living environment. The plan requires the government to make intensive decontamination efforts in the areas and lift the evacuation order by the spring of 2023.

The local administrations involved asked the national government to make clear when the order will be lifted for the remaining areas in the difficult-to-return zone.

The latest plan unveiled by the government may represent a step forward as it offers a specific timeframe for lifting the measure, albeit for only those who wish to return to their homes. The blueprint has brought a ray of hope to local residents who have been facing a distressingly uncertain future outlook.

But the fact remains that the government has yet to offer a realistic road map to deliver on its promise to lift the evacuation order for the entire restricted zone sometime in the future, no matter how long it will take.

The government has pledged to tread carefully in this undertaking, holding multiple meetings with residents to ask about their desire to to return home as well as talks with local administrations on the range of areas to be decontaminated.

But it has yet to announce specifics about the decontamination, such as the areas to be covered or the method to be used.

The residents in these areas have been living as evacuees for more than 10 years. Many of them are likely to find it difficult to decide even if they want to return to where they once lived.

If the government proceeds with the latest plan, it needs to work out details of how it will tackle the challenge in a “careful” manner. The details should cover how the government will confirm the local residents’ wishes and ensure the level of decontamination that can reassure them of the safety of returning to their homes.

Moreover, the land and buildings that nobody wants to return to will not be covered by the plan to lift the order. This will remain a serious issue for the future.

The government has so far spent some 3 trillion yen ($27.45 billion) on decontaminating areas subject to the evacuation order. This effort has allowed some 14,000 residents, or 30 percent of the local population, to return home. It will cost taxpayers a huge additional amount of money to accelerate the cleanup work in the difficult-to-return zone, where nearly 22,000 people are still registered as residents.

The government says the necessary funds will be budgeted from the Fukushima reconstruction special account and other appropriate financing sources. But it admits the total amount of money required cannot be estimated since it depends on the number of local residents who want to return.

In other words, it has no clear and viable plan to raise the necessary funds.

The 2011 special law to deal with contamination by radioactive materials from the Fukushima plant stipulates that it is the government’s “obligation” to deal with radiation pollution caused by the accident.

The government has a duty to offer as soon as possible a clear future vision for tackling this formidable challenge, specifying when and how the evacuation order will be lifted and what kind of policy support will be provided to residents including those who choose not to return to the areas.