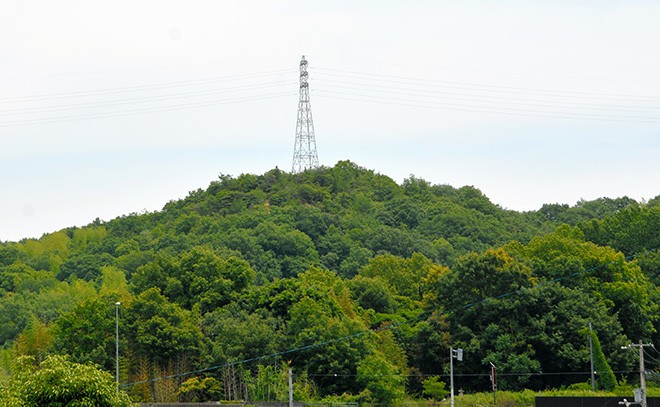 A hill in western Japan certified by the economy ministry as a site to generate solar power is seen in June. But the actual solar power generation site is located about 3 kilometers away. (Yukiko Sakamoto)

On a small hill surrounded by rice paddies and houses in an idyllic town in western Japan, an array of solar panels to generate electricity was approved at the end of fiscal 2014.

But seven years later, there is no trace of development on the hill.

Instead, solar panels are expected to be installed in a neighboring city, about 3 kilometers from the site.

From there, electric wires will run for several kilometers to transmit electricity to the small hill.

These wires will be connected to cables of electric power companies from the hill and the electricity sold to them as if generated on the site. This mislabeled point of origin will net the operator a higher price under the government's feed-in tariff system (FIT), put into force in fiscal 2012.

"The power will be generated at a different site, but it will be sold as if it were generated at the hill,” a person related to the project told The Asahi Shimbun.

There was a similar case in which two sites were located about 30 kilometers apart and separated by three municipalities.

A consultant familiar with the industry said, “It deserves to be called a falsification of the origin of electricity.”

“But it is not illegal, and, indeed, it has been a good loophole,” the consultant said.

However, operators receiving a higher price means that the difference is tacked on to electricity bills and the public ends up paying more.

The central government in July released a draft of a plan to double the current amount of renewable energy.

Solar power is expected to lead such an effort.

But the practice of mislabeling the site where the electricity was generated remains a problem due to the purchasing price.

The feed-in tariff system mandates electric power companies to purchase renewable energy at the price set by the central government. The purchase price for industrial solar energy has been fixed for 20 years.

Related costs have been added to general electricity bills.

But the amount has been reduced in stages. Currently, it is about 10 yen per kilowatt-hour.

The later a business is certified by the central government, the lower the selling price becomes.

At the proposed location in the small town in western Japan, an operator obtained new certification from the central government for a site in the neighboring city after local residents opposed the hillside installation.

There is a special exemption set by the economy ministry, which allows an operator to expand a site near a certified site if it lacks the space to generate power and connect the two sites by electric wires.

The ministry was anticipating a case in which the two sites would be facing each other across the street.

But the exemption “allowed operators to inappropriately stretch the concept,” a ministry official said.

There are “quite a few such cases around the country,” the official said.

What lies behind the loophole is the capitalization of solar power rights.

The rights to generate renewable energy at a site certified by the central government when the purchase price was high are very highly sought-after in the industry.

“They are still sold and purchased at inflated prices,” a specialized consultant said.

In the project in the small town in western Japan, the transfer of rights occurred more than five times, according to corporate registration documents.

A resident in the town said, “People one after another showed up to talk about the business.”

The Asahi Shimbun asked the current owner of the rights for an interview but has not received a response so far.

Obtaining the rights first and postponing the project was a common practice when the selling price of electricity was high.

Some obtained the rights just to resell them.

The system was initially designed “loosely” and it enabled such practices, the ministry official said.

But even if a business obtains the rights, they are considered worthless unless it can operate an electric power generation business.

To avoid potential obstacles, such as local opposition, the industry came up with the tobichi practice.

But after July 2020, setting up a distant tobichi was banned.

But tobichi sites already established remained exempted from the regulation.

Noriaki Yamashita of the Institute for Sustainable Energy Policies said, “The system that allows (operators) to obtain the rights for a long time without generating power has created a distortion.”

The central government’s plan to increase the proportion of renewable energy is a major policy undertaking.

“The design of institutional arrangements is important and traditional leniency should not be tolerated. It will be a gut check for the central government,” Yamashita warned.