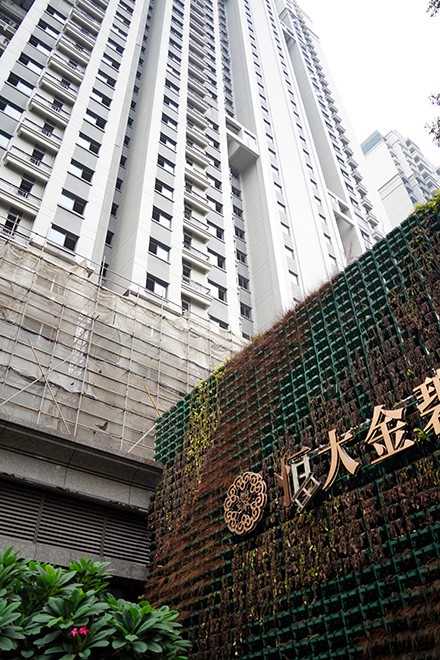 An apartment building developed by Evergrande Group in Guangzhou. Its construction has been suspended since August, according to people familiar with the project. Photo taken Sept. 15 (Ryo Inoue)

With China's markets reeling from a financial crisis at Evergrande Group, Beijing is torn over bailing out the country’s leading real estate player to avoid economic disaster as doing so would run counter to President Xi Jinping’s stated policy of not favoring the rich.

A collapse of Evergrande could ignite immense financial and social turmoil. But leaders of the Chinese Communist Party have been taking a wait-and-see approach over the crisis instead of rushing to rescue the company.

One example showing the company’s deepening trouble is a high-rise apartment under construction at a location 15 kilometers from the center of Guangzhou in Guangdong province in southern China.

Concrete and squared timber were left strewn about in a section of the first floor of the building. The lower floors were sealed with sheets.

Despite the fact that they were still under construction, an Evergrande Group salesman claimed that all of the approximately 420 units in the apartment building that the company started selling in February “were all sold out.”

But construction work has been suspended since August, said a janitor, 63, working near the site.

The janitor said 20 to 30 construction workers protested at the site last month, saying they were not paid for their work.

Chinese media has reported that Evergrande Group’s other projects have been put on hold in other parts of the country as well due to its funding difficulties.

In Shenzhen in the same province, where Evergrande Group’s headquarters is located, a fierce protest rally took place from Sept. 13 to Sept. 14.

More than 100 people participated, repeating calls of, “Return to us the money that we earned with our sweat and blood.”

Most of the protesters purchased apartments and investment products sold by the company.

One protester, a 40-year-old company employee in Zhongshan in the same province, said the construction of an apartment she bought in Zhongshan two years ago has been suspended.

The woman also bought an investment product worth 400,000 yuan or about 6.8 million yen ($62,385) from Evergrande Group as it was billed as bearing 10 percent annual interest.

“I trusted Evergrande Group because it is a top player in the industry,” she said. “Under the current circumstances, I may not be able to get even the principal back.”

The fallout from the company’s financial crisis is widening.

Since the beginning of this year, it has plunged by 80 percent.

In the Shenzhen market, trading in Evergrande Group corporate bonds was temporarily halted after a fall of more than 20 percent.

Evergrande Group was established in Guangzhou in 1996, after China’s economic reforms.

The company grew rapidly as its offer of compact apartments built in what it pitched as a “better living environment” proved popular at a time when China’s real estate industry was booming.

Evergrande Group continued to develop more projects by borrowing funds from banks as it appeared that the more it built, the more it could rake in profits.

With speculative money pouring in from international investors and the wealthy, it expanded and attempted to diversify its businesses, making forays into car manufacturing and movie production, among other things.

But the diversification line backfired and ended up running 9.7 trillion yen in debt with interest as of the end of June, a figure impossible for the company to repay with its own funds.

An additional blow came when the leadership of the Chinese Communist Party introduced rules to curb the ratio of debts against assets of a business.

The move is intended to keep real estate prices in check, which have soared in urban areas to the point that the public can no longer afford to buy a place to live.

Party leaders also restricted the amount of loans a company can get, making it more difficult for Evergrande Group to continue with its aggressive business approach using loans as leverage.

The regime is not moving to bail out the company as those who have been hard-hit by Evergrande's crisis are deep-pocketed individual investors rather than the general public.

Xi, in an effort to secure a third term, has begun to uphold the goal of pursuing wealth for a society as a whole by eliminating economic disparities between the rich and poor.

Chinese leaders fear that coming to the rescue of wealthy investors would lead to a loss of popular support.

Still, they will need to rein in damage to the country’s economy from a sudden collapse of a large company. Evergrande Group’s downfall could also trigger social instability.

A challenge for the leaders will be how to help the struggling company make a soft landing while mitigating the shock of the company’s financial crisis.

(This story was compiled from reports by Ryo Inoue in Guangzhou, Akihiro Nishiyama and Takashi Funakoshi in Beijing.)