LDP candidates show no interest in digging up Abe scandals 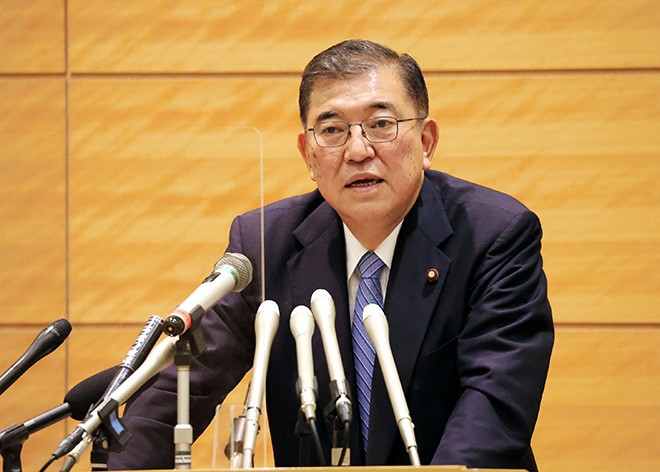 Shigeru Ishiba, a former secretary-general of the Liberal Democratic Party, announces on Sept. 15 that he will not run in this month's LDP presidential election. (Koichi Ueda)

The presidential election for the ruling Liberal Democratic Party will be more “open” for voting members, but the eventual winner will likely keep the door closed on scandals that plagued a former prime minister.

Fumio Kishida, a former foreign minister, is the only candidate in the Sept. 29 election who heads an LDP faction.

Although the faction is throwing its entire support behind Kishida, almost all other LDP factions have taken the unusual step of allowing members to decide on their own how to cast their ballots.

Candidate Sanae Takaichi, a former internal affairs minister, does not belong to any faction.

The other contender, Taro Kono, state minister in charge of administrative reform, is a member of the second largest LDP faction, led by Finance Minister Taro Aso.

However, the Aso faction does not appear to be moving toward a unified position in supporting Kono.

Shigeru Ishiba, a former LDP secretary-general, announced on Sept. 15 that he was not running and expressed his support for Kono.

“I felt it was important that there should be a single candidate who held the view of wanting to change the LDP and how politics are carried out in order to ensure victory for that individual,” Ishiba said at a news conference to explain his decision.

At a faction gathering before the news conference, Ishiba made clear that members would be free to vote for whoever they chose.

But one faction executive said most members shared Ishiba’s thinking regarding candidates in the race.

“Those who do not try to get close to the feelings of those who are the saddest should not consider themselves to be politicians,” Ishiba said.

Ishiba is one of the few LDP lawmakers who have openly called for a further investigation into the falsifications and other scandals that came to light when Shinzo Abe was prime minister.

The three remaining candidates are unlikely to take up Ishiba’s baton and try to get to the bottom of some of the negative legacies from the Abe administration.

Kono himself has said he did not think there was a need to probe further into the Moritomo scandal since prosecutors had already concluded their investigation.

At one time, Kishida raised the possibility of making an effort that would convince the public.

But after facing a backlash from those close to Abe as well as his own supporters, Kishida quickly backtracked and said that did not mean he wanted another investigation.

Takaichi, a close ally of Abe, also has no intention of digging up old scandals.

The three prospective candidates may also find it difficult to turn a critical eye on the eight years or so that Abe was in power since they all served as ministers in his Cabinet at one time or another.

(Naoki Kikuchi and Ryuichi Yamashita contributed to this article.)