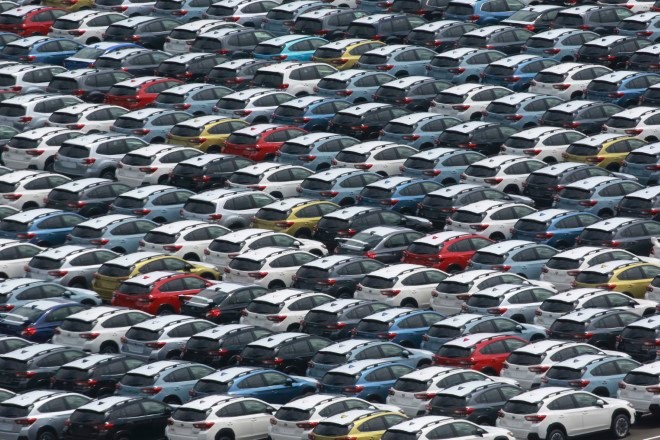 Subaru cars are parked to wait for export at Kawasaki port, south of Tokyo, on Sept. 7. (AP Photo)

The 6.6 trillion yen ($60 billion) in exports compared with 5.2 trillion yen a year earlier, when the economy was just beginning to recover from the initial impact of the coronavirus pandemic.

Analysts had forecast an increase of more than 30 percent. Exports rose 37 percent year-on-year in July.

Tokyo and some other regions remain in a state of emergency due to outbreaks spurred largely by the delta variant of COVID-19. The strong rise in imports suggests that consumer demand has remained relatively strong, said Marcel Thieliant of Capital Economics.

However, “the external trade data suggest that net exports may knock off around 0.3 percentage points from Q3 GDP growth,” he said in an analysis.

Overall exports to the U.S. rose 23 percent and shipments to Asia climbed 26 percent. But exports to China were weaker, rising almost 13 percent.

But auto manufacturers have had to slow production as they struggle with shortages of computer chips and other parts due to soaring demand for IT products.

The data showed exports of cars slipped 1.5 percent in August, while imports of oil and other fuels surged 21 percent.