Spectacular falls in Kyushu found on island of Amami-Oshima 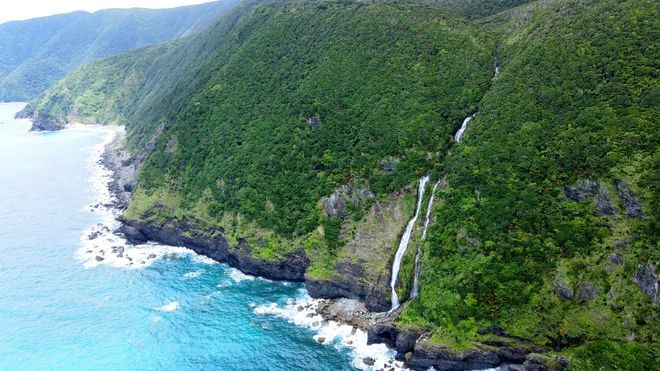 The mountain waterfall, likely the tallest in the Kyushu region, tumbles into the Pacific Ocean off Amami, Kagoshima Prefecture, in June 2020. (Provided by Futoshi Hamada)

AMAMI, Kagoshima Prefecture--A coastal waterfall previously known only to a few and largely invisible from the sea turns out to have one of the largest vertical drops in the entire Kyushu region of southern Japan.

Water from the falls, situated on the eastern coast of Amami-Oshima island here, tumbles 181 meters down a mountain cliff into the Pacific, the city government said Sept. 10 when it posted an image of the yet-to-be-named cascade on the city's website.

Fishermen and amateur water sports enthusiasts knew about the existence of the waterfall, but only from the parts visible from the sea. They had no idea of its full grandeur.

Futoshi Hamada, a 68-year-old photographer who lives in the city of Amami, operated a drone on several occasions from May last year to capture full footage of the falls.

He turned over the material to the city government, which then used satellite survey methods this past August to calculate the drop height, officials said.

Amami-Oshima was inscribed in the list of UNESCO World Natural Heritage sites this past summer.

“There are still unknown territories on this island,” Hamada said.

A roughly 100-meter section can be viewed from the sea, but the coast near the waterfall is a rocky tract with rough waves and not easily accessible, he added.

The city initially called on the public to contribute candidate names for the waterfall. But it announced Sept. 21 that it stopped soliciting names on Sept. 17 after some local residents pointed out the waterfall had already been known by at least two names by a small number of people for many years.

Yoshihiro Sakae, 67, head of a neighborhood association in the Kominato district near the waterfall, said the falls had long been known locally as Kurukichi no Taki, which means black rock waterfall. Some people called it Fuchiburu no Taki, named after the Futsuburu community that was once located upstream of the waterfall, he added.

The city plans to decide on an official name after taking the opinions of local communities into consideration.

The city did not interview local residents about the waterfall before it started to solicit names and received about 3,500 applications, officials said.

(Kazuaki Kanda is a stringer for The Asahi Shimbun based in Amami-Oshima island.)