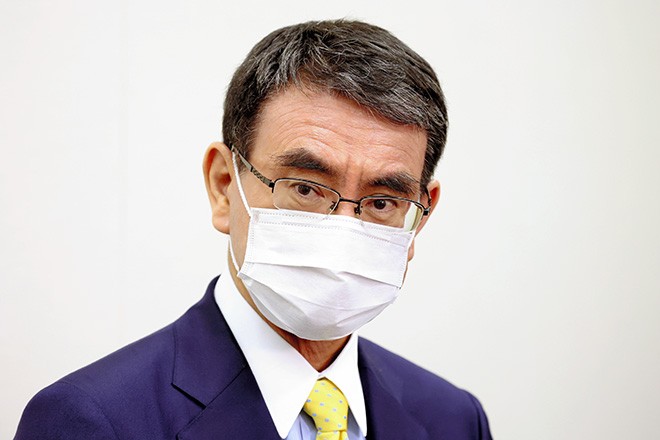 Taro Kono, the state minister in charge of administrative reform, who is running for leadership of the ruling Liberal Democratic Party, on Sept. 15 (Koichi Ueda)

Taro Kono, a contender to become leader of the ruling Liberal Democratic Party, has come out in favor of legalizing same-sex marriages and allowing married couples to have separate surnames.

“I agree with both issues,” Kono told reporters on Sept. 16.

Kono said that “constitutional issues” must be sorted out to allow same-sex couples to legally marry.

The LDP is known for championing traditional conservative family values and many members have opposed same-sex marriages and separate surnames.

But Kono said, “Issues like these, which call values into question, should be widely debated in the Diet and (lawmakers) should be allowed to support or vote against the bills regardless of party affiliation.”

Kono also said he will work to increase the number of female politicians in the party.

“It is important to create an environment where women can raise their hands,” he said.

But at the same time, he is opposed to a so-called gender quota system that would ensure women make up a certain number of candidates and seats.