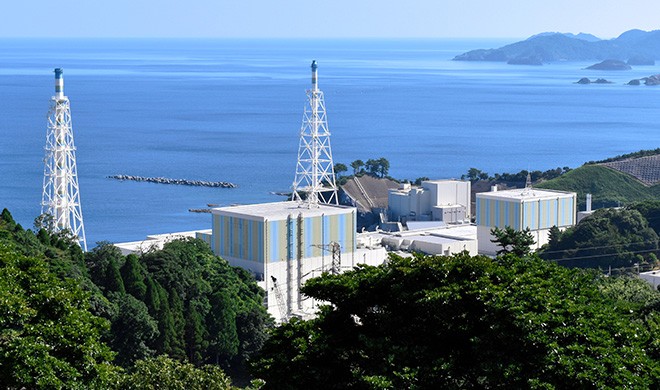 The No. 2 reactor building, forefront, at the Shimane nuclear plant in Matsue (Asahi Shimbun file photo)

The government’s nuclear watchdog approved safety measures at a reactor in Shimane Prefecture on Sept. 15, adding momentum to Chugoku Electric Power Co.’s plan to restart the plant in fiscal 2022 at the earliest.

The Nuclear Regulation Authority certified that the No. 2 reactor at the Shimane nuclear plant in the prefectural capital of Matsue meets the stricter safety regulations that went into force after the 2011 Fukushima nuclear disaster.

The No. 2 reactor, with a capacity of 0.82 gigawatt, is the 17th reactor across the country cleared by the NRA.

The plant is the only one in Japan located in a prefectural capital.

More than 450,000 people live within 30 kilometers of the facility and would be forced to evacuate in the event of an accident.

Under a previous agreement, Chugoku Electric still needs the consent of the Shimane prefectural government and the Matsue city government to restart the reactor.

The prefectural governor and the Matsue mayor have not indicated any opposition to utility’s plan to bring the reactor back online.

But there are moves in other municipalities in the prefecture and neighboring Tottori Prefecture to seek a similar arrangement with the company.

The No. 2 unit is a boiling water reactor, the same type as the ones that melted down at the Fukushima No. 1 nuclear plant.

The Shimane nuclear plant has two other reactors.

The No. 1 reactor, with a capacity of 0.46 gigawatt, is being decommissioned.

The No. 3 reactor, with an output of 1.37 gigawatts, has been under construction since before the Fukushima accident.

The NRA began regulatory screening of the No. 3 reactor in 2018.

Chugoku Electric initially estimated that work to bolster safeguards at the nuclear plant would exceed 100 billion yen ($1 billion), including measures to protect the reactors against powerful earthquakes and tsunami.

But it has revised the figure upward to 600 billion yen.

The overall safety costs will likely rise further because Chugoku Electric is required to build a facility to safeguard the reactors from potential terrorist attacks.

However, Mareshige Shimizu, president of the company, defended the plan to operate the No. 2 and No. 3 reactors.

“It will bring benefits that match our investment once they are put into operation,” he said at a news conference on Sept. 10.

(This article was written by Yu Fujinami and Shiro Matsuda.)