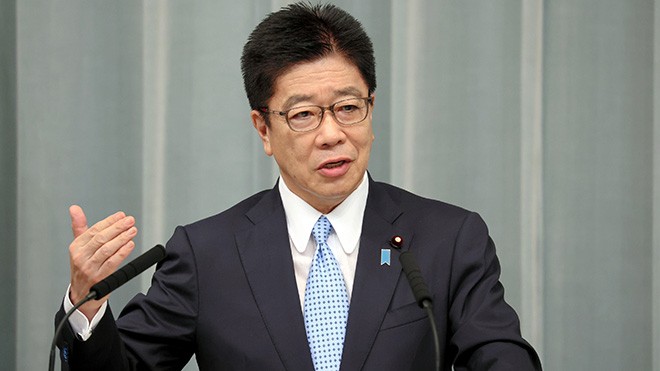 Citing dangers both at sea and in the air, Chief Cabinet Secretary Katsunobu Kato expressed “serious concerns” about North Korean missiles that landed in Japan’s exclusive economic zone on Sept. 15.

“It was a major threat to the safety of our nation and having the missiles land in the zone without prior notification was a dangerous act that raised serious issues concerning the safety of aircraft and ships,” Kato said at his daily news conference on Sept. 16.

When Prime Minister Yoshihide Suga met with reporters on the afternoon of Sept. 15, he said it was believed the missiles landed outside the EEZ. Later that same day, the government announced that the missiles had landed within the EEZ.

Asked by reporters about whether that indicated problems with Japan’s capability to track enemy missiles, Kato said, “We announced that it landed outside the EEZ because based on information received immediately after the launch was detected, the forecast was that it would land outside the EEZ.”

He said information is made public as expediently and accurately as possible based on the information available at the time to secure the safety of aircraft and ships.

Kato added that there was a need for further efforts to provide accurate information by constantly considering what should be done to ensure safety.

According to the Defense Ministry, the missiles flew for about 750 kilometers on an irregular course and landed in the Sea of Japan.

North Korea’s Korean Central News Agency on Sept. 16 reported that a newly established mobile railway missile regiment participated in a firing exercise by shooting at a target from about 800 km away in a mountainous region of central North Korea.