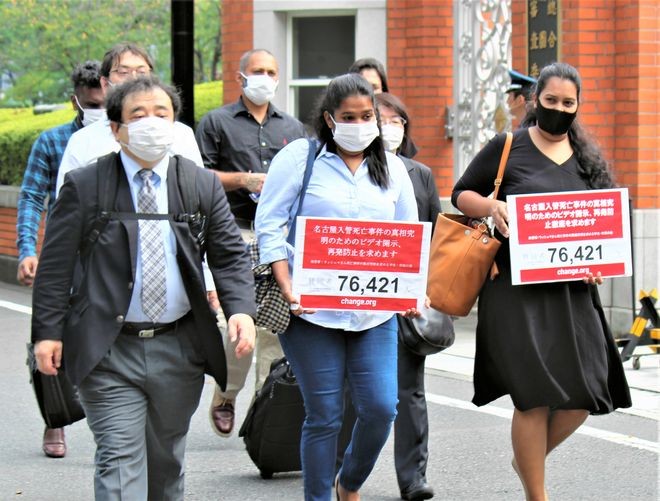 Wishma Sandamali’s sisters hold sign as they head for the Immigration Services Agency in Tokyo's Chiyoda Ward on Sept. 10 to see the video footage of Wishma, who died during detention. The signs show they collected 76,421 signatures from people supporting their petition demanding the release of the video footage. (The Asahi Shimbun)

The Justice Ministry’s response to the death of a Sri Lankan detainee at an immigration facility casts serious doubt over the ministry’s commitment to ensuring that no tragedy of this kind will occur again.

The immigration control authority has been scrambling to protect its organization instead of facing up to serious problems behind the death of Wishma Sandamali from illness at the Nagoya Regional Immigration Services Bureau in March.

The way the authority has been handling the scandal has incurred the distrust of her bereft family.

The Immigration Services Agency had security camera footage showing Wishma’s last two weeks in detention. Officials at the agency edited the video footage recorded up to her death on March 6 down to just two hours before making it available to her two sisters last month.

But the sisters had to stop watching the footage after about 70 minutes as they became too distressed to continue seeing how Wishma grew weaker day by day, and the inhumane behavior of immigration officials taking care of her.

They were scheduled to watch the rest of the edited footage last week, but did not because the agency refused to allow their lawyer to be with them as they watch the video. The matter has reached a stalemate.

The principal obligation of a public facility to detain individuals for law enforcement reasons is to protect the lives and health of detainees and help them return to society.

But officials at the facility in Nagoya failed to make serious responses to Wishma’s claim of ill health, allowing her to die. Needless to say, the facility should be held strictly accountable for what happened.

The video footage offers some clues to the facts. But it would be difficult for the bereft family, who came from Sri Lanka to Japan in haste following Wishma’s death, to grasp and evaluate accurately the situation surrounding the tragedy.

They have the right to want the lawyer they trust to be present when they watch the video due to their anxiety and for other reasons.

But the authority says it allowed the bereft family to watch the video as an exception in special consideration of their feelings. It has cited security concerns and the dignity of the deceased as reasons for refusing to allow a lawyer to be present with the sisters when they watch the video.

But the reasons cited are far from convincing. Since the video only shows Wishma in her cell, it is hard to image how the presence of a lawyer can raise any “security concerns.” The key question confronting the immigration control authority is how it viewed the “dignity” of Wishma and how it actually treated her.

The authority’s rationale for refusing a lawyer’s presence appears to be nothing but a pretext for preventing the facts from being scrutinized.

The bereft family also demanded disclosure of administrative documents concerning the events leading to her death. The authority disclosed some 15,000 pages of such documents as the officials’ daily reports on their operations and records of meetings between Wishma and her supporters. But most parts were blacked out.

The authority cited possible effects on security operations and protection of personal information as reasons for taking the step.

All these acts have effectively denied the grieving family's access to all relevant information held by the agency. The agency’s behavior can only be characterized as an all-out effort to conceal key facts at the cost of its credibility.

There are other facts that call into question whether Justice Minister Yoko Kamikawa is doing what is expected of the top official responsible for justice in law enforcement.

One is the task force she has set up to prevent a recurrence of similar incidents. It is difficult not to be appalled to learn that the team is headed by a senior official at the agency.

In response to a sequence of inmate injuries and fatalities in Nagoya Prison and a scandal over the fabrication of investigative evidence and subsequent cover-up involving officials at the Osaka District Public Prosecutors Office, the ministry sought the help of many independent experts to reform the organization and the system.

The lukewarm responses to the death of a foreign detainee attest that Kamikawa is not aware of the seriousness of the problems behind the tragedy.