RUGBY/ Australia to meet Japan in international faceoff in October 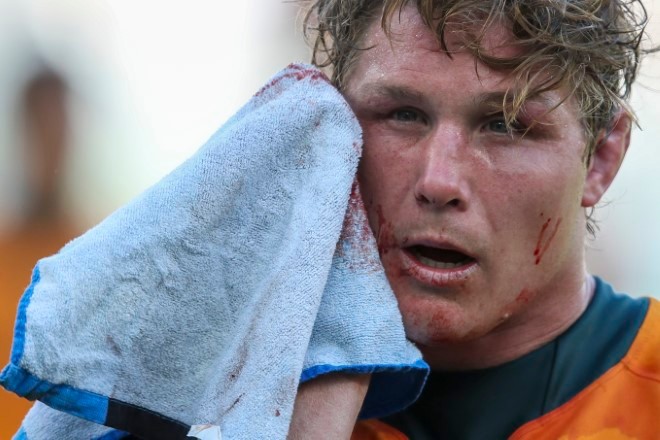 Australia’s captain Michael Hooper wipes blood from his face following the Rugby Championship game between the All Blacks and the Wallabies in Perth, Australia, Sept. 5. (AP Photo)

SYDNEY--Australia will play Japan in the southwestern city of Oita on Oct. 23 on its way to Britain for a three-test rugby tour against Scotland, England and Wales.

Rugby Australia said Saturday it will be the Wallabies’ first match against Japan since November 2017 when they defeated the hosts 63-30 at Yokohama. The teams have played seven times since their first match in 1975 at the Sydney Cricket Ground,

Wallabies captain Michael Hooper says he hopes there will be regular test matches against Japan and the country’s possible entry into the Rugby Championship. He said the October match was a step forward between the countries that should be playing each other more often, with their entry alongside South Africa, Argentina and New Zealand in the Rugby Championship worth consideration.

“Japan rugby’s got a lot to offer… it’s got a lot of really good players up there,” Hooper, who played alongside former New Zealand skipper Kieran Read for Toyota Verblitz last season, said Friday.

“It may become a significant fixture for us each year and that’s great. It’d be great to have Japan involved in some capacity.”

The Oita test will be Japan’s first at home since hosting the 2019 World Cup.

“It is a hugely important moment for us to reconnect with our fans and the wider Japanese public, following the success of the World Cup,” Japan coach and former All Black player Jamie Joseph said.

The Wallabies will play Scotland on Nov. 7 at Murrayfield, England on Nov. 13 at Twickenham and Wales on Nov. 20 at Cardiff.